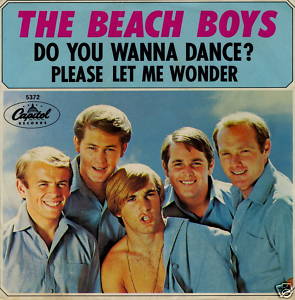 By early 1965 Brian Wilson was beginning to move away from his signature surf and car songs. His studio techniques were now almost fully developed and his classic album release, PET SOUNDS, was a little over a year away.

“Do You Wanna Dance” was a remake of the old Bobby Freeman hit. The vocals are heavily layered and the tempo is upbeat. In the middle of it all is a rare Dennis Wilson lead vocal that made the A side of one of their single releases. It would be a moderate hit for them at the time reaching number 12 on the National charts. It remains one of my favorite releases from this era of their career.

“Please Let Me Wonder” was the flip side. It is a gentle ballad with wonderful harmonies and is more in line with what Brian Wilson had in mind in so far as The Beach Boys musical future was concerned. It would only reach 52 on the singles charts but was a nice counterpoint to “Do You Wanna Dance.”

As a collector, the bonus was the fact that it came with a picture sleeve that catches the group at their best.

This entry was posted on Saturday, November 28th, 2009 at 5:37 am and is filed under Beach Boys Reviews, Small Record Reviews: The 45. You can follow any responses to this entry through the RSS 2.0 feed. Both comments and pings are currently closed.