Sloop John B 45 by The Beach Boys 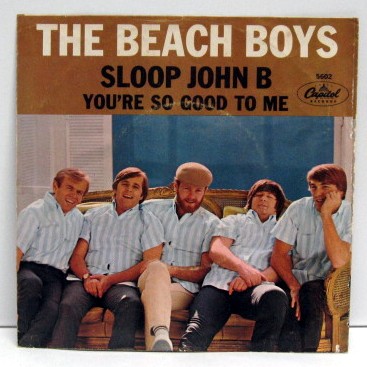 “Sloop John B” was a rare Beach Boys track that was not written by Brian Wilson or any other member of the group. It was an old West Indian folk song, “The John B Sails,” from a 1927 Carl Sandburg collection. Alan Lomax, who recorded many of the leading Delta Blues artists, made a field recording of it during 1927. The Weavers and The Kingston Trio turned it into a folk song during the fifties.

It was Al Jardine who suggested to Brian Wilson that The Beach Boys record it. Wilson changed the tune around and made it into a rock classic. It appeared on the groups legendary PET SOUNDS album.

It was released as a single during the early part of 1966 and reached number three on the American singles charts. ROLLING STONE MAGAZINE ranked it as one of the 500 greatest songs of all time. It would be a Beach Boys concert staple for decades.

Today it is over shadowed by many of their classic songs but remains a wonderful part of their vast catalogue.

This entry was posted on Saturday, July 31st, 2010 at 4:48 am and is filed under Beach Boys Reviews, Small Record Reviews: The 45. You can follow any responses to this entry through the RSS 2.0 feed. Both comments and pings are currently closed.