The Letter 45 by The Box Tops 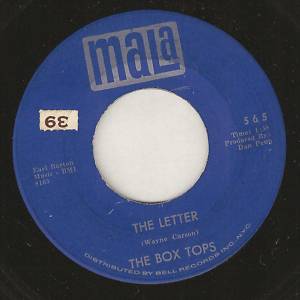 “Give Me A Ticket For An Aeroplane!” With those words The Box Tops were off and running with one of the great single releases of the late sixties. “The Letter” would spend four weeks in the number one position on The American charts during the second half of 1967.

The Letter revolves around Chilton’s gruff vocals and a raw but memorable melody. Sixties AM radio at its best.

This entry was posted on Tuesday, September 21st, 2010 at 9:40 pm and is filed under Small Record Reviews: The 45. You can follow any responses to this entry through the RSS 2.0 feed. Both comments and pings are currently closed.