You Keep Me Hangin’ On 45 by Vanilla Fudge 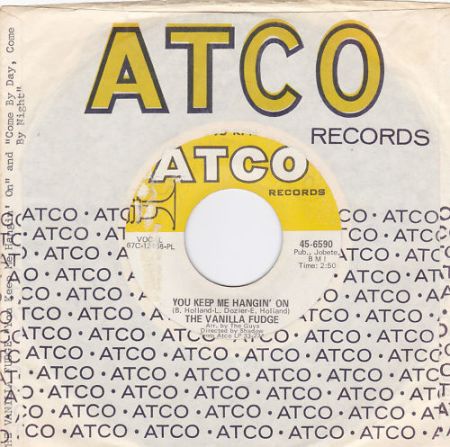 The Vanilla Fudge were active 1966-1970 before disbanding in 1970. The group consisted of vocalist/organist Mark Stein, bassist Tim Bogert, guitarist Vince Martel, and drummer Carmine Appice. Down through the years the group reunited a number of times with other musicians filling various slots. Today the original four members have reformed and record and tour as Vanilla Fudge.

They had a unique sound. They would take well know songs and slow them way down and I mean way down while giving them a heavy rock treatment. Their sound was unique during the late 1960’s.

They were basically an album band as all five of their original studio albums cracked the American top forty with their self titled debut making it all the way to number six on the BILLBOARD MAGAZINE CHARTS.

It was the old Motown hit made famous by The Supremes. Their interpretation was about as far from Motown as you can get. It remains a fascinating piece of the late sixties music scene.

This entry was posted on Friday, January 28th, 2011 at 2:29 am and is filed under Small Record Reviews: The 45, Supremes/Diana Ross Reviews. You can follow any responses to this entry through the RSS 2.0 feed. Both comments and pings are currently closed.