Massey Hall in Toronto, Canada, has hosted over 10,000 concerts during its 118 year existence. The 2,750 seat venue was only about half-full on May 15, 1953, when it hosted one of the most unique concerts in jazz history when alto saxophonist Charlie Parker, trumpet player Dizzy Gillespie, pianist Bud Powell, bassist Charlie Mingus, and drummer Max Roach took the stage together.

The concert was recorded only because Mingus had the foresight to bring along a simple recording machine which he hooked up to a single microphone. His ingenuity preserved one of jazz music’s shining moments. The resultant album, The Quintet: Jazz At Massey Hall, has been reissued as a part of the Concord Music Group’s Original Jazz Classics Remasters Series. The sound has been cleaned up as much as the original tape will allow, which has resulted in a clear sound. New liner notes by Ashley Kahn give a concise history of the event.

The concert began with a 45 minute performance by the 16 piece CBS All Stars. The Quintet then took the stage for three songs with the tape running. They then left so fight fans in the crowd could listen to the Rocky Marciano – Jersey Joe Walcott championship heavyweight fight, which mercifully ended with a first round knockout. After Powell warmed up the crowd again, The Quintet returned for three more numbers with the tape running once again.

The six songs that make up the album contain just about 50 minutes of jazz bliss. The five musicians were not a tight-knit band by any sense of the word, but rather five individuals who decided to perform together. Their choice of material was conservative, which allowed them to fit comfortably with one another while playing to their strengths.

Gillespie’s runs on “A Night In Tunisia” were fluid, precise, and elicited an enthusiastic audience reaction. “Wee (Allen’s Alley)” contained a mature and powerful performance by Parker, who had less than two years to live. Powell is sometimes a forgotten musician today, but he was one of the key pianists in the development of bebop and his improvisational solos on “Hot House” are both brilliant and melodic. Mingus’ bass lines are both controlled and solid and are best exhibited on “All The Things You Are.” Powell was the youngest member of the group but stands above the crowd on “Salt Peanuts.”

There was no encore and thus are no bonus tracks. When the concert concluded, the six songs became a part of jazz history. Thank you, Charles Mingus!

The Concord Music Group has been reissuing classic jazz albums via their Original Jazz Classics Remasters Series for several years. Three new titles are joining the stellar lineup of past releases: Moonbeams by The Bill Evans Trio, the famous Quintet Concert by Charlie Parker, Dizzy Gillespie, Bud Powell, Max Roach, and Charlie Mingus, plus the subject of this review, Misterioso, by the Thelonious Monk Quartet.

As with all past releases, the sound of Misterioso has been enhanced with 24-bit remastering, which gives the music a startling clarity given its age and the limitations of recording equipment of the time period. There are also extensive liner notes, which give a history of the music contained on the album. Finally, three bonus tracks are included that stretch out to 28 minutes of additional music.

Today, Thelonious Monk is recognized as one of the prominent and most influential jazz pianists and musicians of the 20th century. While he recorded for a number of labels during his lifetime, it was his time with the Riverside label, 1955-1961, that provided many of the centerpiece albums of his career.

During June of 1958, Thelonious Monk and his latest quartet, which included tenor saxophone player Johnny Griffin, drummer Roy Haynes, and bassist Ahmed Abdul-Malik, pulled into the Five Spot Café in New York for Monk’s second residency at the venue. Two of the better live albums in jazz history were recorded during his time at the club. Both Misterioso and Thelonious In Action remain two of the better snapshots of his career.

Despite his odd melodies and use of dissonant notes and chords, he was a perfectionist. In live performances, Monk was always a treat as he was a little looser and relaxed. His improvisational skills always contained surprises and his ability to meld with other musicians of note gave many of his studio recordings new twists and textures.

Misterioso contained a number of tracks that had originated during the 1940s. “In Walked Bud” is a highlight of the release. It was a slightly dark but ultimately carefree tribute to Bud Powell. The Johnny Griffin sax solo is one for the ages and his presence on the album provided Monk with one of the better support musician performances of his long career. Griffin brought a blues foundation to his jazz playing, which combined well with Monk’s style. The title track was something that only Thelonious Monk could pull off, as it was both melodic and atonal. The opening “Nutty,” which sets the tone for the album, “Blues Five Spot,” and “Let’s Cool One” were all vehicles for Monk to play off the other musicians both individually and in unison.

The best of the bonus tracks was a version of “’Round Midnight,” which he presented in a mid-tempo style as opposed to Miles Davis later well-known rendition. It remains one of the better interpretations of one of his most famous compositions.

Misterioso is an album that requires multiple listens to even begin to appreciate and understand and then leaves you wanting more. It is a must for any jazz aficionado.

Comments Off on Misterioso by Thelonious Monk |

Henry Edward Nilsson III, (1941-1994), is best remembered as a songwriter but he managed to place ten songs on the BILLBOARD MAGAZINE Pop Singles Chart during the course of his career.

He was an unusual artist in that he rarely performed live. In fact he was never a part of any major tour during his lifetime.

“Daybreak” was the last chart single of his life. Released during early April of 1979, it reached number 39.

The song was a part of the movie SON OF DRACULA. It’s major claim to fame is the artists who performed on the track as Ringo Starr, George Harrison, and Peter Frampton all provided support for Nilsson’s vocal, which isn’t bad company.

Comments Off on Daybreak 45 by Nilsson |

Yesterday Once More 45 by The Carpenters 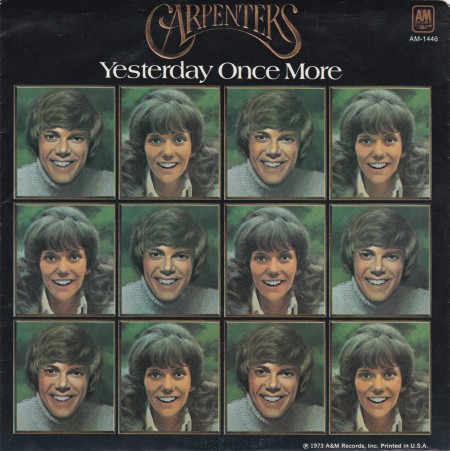 Karen and Richard Carpenter were siblings who formed one of the most successful duos of the 1970s and early 1980s. They ruled the easy listening/pop world with a series of singles that sold tens of millions of copies.

I was more of a rock ‘n’ roll guy during the 1970s but “Yesterday Once More” was one of my guilty pleasures. It was a poignant ballad of nostalgia with Karen’s clear vocal waifing over the simple instrumental backing. It reached number two on the BILLBOATD MAGAZINE Pop Singles Chart during the summer of 1973.

The Carpenters had three number one singles and five more that reached number two during the course of their career. THey remain one of the what if’s of music as Karen passed away in 1983 at the age of 32.

Comments Off on Yesterday Once More 45 by The Carpenters | 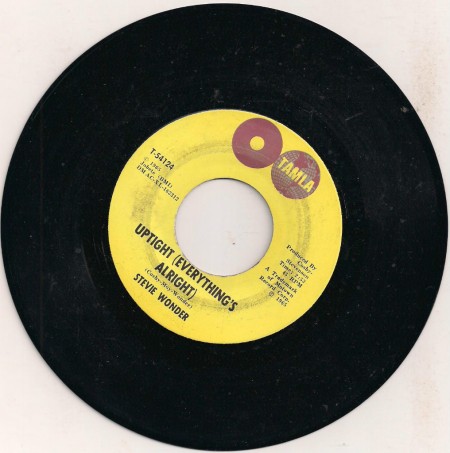 Stevie Wonder hit number one with his “Fingertips” release during the summer of 1963. At the time he was the youngest artist to ever top the BILLBOARD MAGAZINE Pop Singles Chart. While he would have a number of chart singles following his first big hit, it would be two and a-half hears before he would reach the top ten again.

Stevie Wonder was all of 15 when he released “Uptight (Everything’s Alright)” during late 1965. It marked the beginning of a new phase of his career. The music was now much more sophisticated as an upfront guitar sound, thundering drums, pulsating bass, and a big brass sound all provided the foundation for his vocal.

“Uptight” reached number one on the BILLBOARD Rhythm & Blues Chart and crossed over to the Pop Chart where it peaked at number three. It was also his first chart single in the U.K. where it reached number 14.

Dozens of hits would soon follow as he would become one of the dominant artists on the singles chart during the 1960s, 1970s, and 1980s.

Comments Off on Uptight (Everything’s Alright) 45 by Stevie Wonder |

Way Down 45 by Elvis Presley

Elvis Presley had 148 singles reach the BILLBOARD MAGAZINE Pop Singles Chart during his lifetime and “Way Down” was number 148. It first reached the chart, June 25, 1977 and peaked at number 31. On its way down the chart, news of Elvis’ death broke and back up the chart it went, all the way to number 18.

It may not rank among his classic performances but it contained a nice bluesey vocal by Elvis. The low notes at the end of each chorus by J.D. Sumner are worth hearing themselves.

Comments Off on Way Down 45 by Elvis Presley |

Half As Much by Roaemary Clooney

Hank Williams had a number two country hit with “Half As Much.” Columbia’s Mitch Miller was watching and he had Rosemary Clooney record a pop version of the song.

It did not top the BILLBOARD MAGAZINE Best Sellers In Stores Chart or The Most Played By Disc Jockeys Chart but it did spend three weeks at number one on the Most Played In Jukeboxes Chart beginning July 26, 1972.

Clooney was a star during the 1950s but her commercial popularirity waned as the rock ‘n’ roll era pregressed. She continued to perferm on the club curcuit until just before her death in 2002.

Comments Off on Half As Much by Roaemary Clooney |

Love Is A Four Letter Word 45 by Joan Baez

Joan Baez was a key figure in the American folk revival movement of the 1960s. She has also been in the forefront of social causes for the last half-century. While her popularity peak was during the 1960s through the mid-1970s, she continues to record and perform live down to the present day.

“Love Is A Four Letter World” is a Bob Dylan composition that I don’t think has ever been recorded by him.

It is a song that has always been associated with Baez, who first issued it as a single during early 1969. It spent four weeks on the BILBOARD MAGAZINE Pop Singles Chart and peaked at number 86.

The song has since become an iconic Joan Baez tune. It has appeared on a number of her albums and is still a part of her stage act.

You Were Wrong 45 by Joni James

If there was ever an artist who needed to change her name it was Giovanna Carmella Babbo. She took on the stage name, Joni James and became a sweetheart of the 1950s.

She has sold close to 100-million singles and albums during her career. She was one of the female stars of the 1950s who consistently placed her releases on the BILLBOARD MAGAZINE Charts. She retired in 1964 to care for her family but resumed touring during the early 1990s.

“You Were Wrong” was a single that did not chart but the picture sleeve keeps alive why she was so popular.

Comments Off on You Were Wrong 45 by Joni James |

At 95 Vera Lynn remains one of the revered musicians and people in her home country of Great Britain. During World War II she gained respect and fame by constantly touring to sing for the troops in different parts of the war zone.

“Auf Wiederseh’n Sweetheart” was a ballad where Lynn’s powerful voice would soar over the chorus. It became one of the biggest hits of 1952.

While her popularity diminished in the United States during the rock ‘n’ roll era, she remained a star in her home country.

Comments Off on Wiederseh’n Sweetheart by Vera Lynn |