Dancer And The Moon by Blackmore’s Night

Who knew that when Ritchie Blackmore was the lead guitarist for hard rock bands Deep Purple and Rainbow, someday he would find contentment and love as a part of the rock/renaissance band Blackmore’s Night? But here he is 16 years and a dozen or so albums down the road.

The band’s albums tend to have a flow to them. They have fused a modern rock sound with elements of renaissance music into a unique and many times brilliant mix. The band has not veered from that approach, so If you like one album; you will probably like them all. Their latest release, Dancer and the Moon,is except for two tracks mostly more of the same, which should please their ever-growing fan base.

Blackmore’s Night has covered a number of songs by outside writers with varying results. Songs such as “Can’t Help Falling in Love” (Elvis), “First of May” (Bee Gees), “Diamonds and Rust” (Joan Baez), “The Times They Are A-Changin’” (Bob Dylan), and “Celluloid Heroes” (Kinks) have, for better or worse, graced their albums. This time they have recorded the best cover song of their career, Randy Newman’s “I Think It’s Going to Rain Today.” It is the album’s first track and one where the band veers from their usual approach. It is more of a pop song, since the group changes the song’s tempo, plus Candice Night’s vocals bring a polish to the track. Blackmore’s guitar play is sedated, which provides a subtle foundation for the performance.

The second track, “Troika,” finds the band back in familiar territory. It is English renaissance music meeting the sounds of the Russian Volga boat men. The music then settles in to their well-known groove. It is not their most energetic release, but after several listens the music sneaks up on you to create a pleasant flow. “The Last Leaf,” “Dancer and the Moon,” “The Spinner’s Tale,” and “The Moon Is Shining (Somewhere Over the Sea)” all fit in with their previous work. There is also a beautiful take on the traditional Welsh folk tune, “The Ash Grove.”

The second song that is outside the norm is the album’s last track, “Carry On…Jon.” It is one of the more poignant ones of Blackmore’s career, as it is an instrumental tribute to his old Deep Purple bandmate Jon Lord, who passed away last year. It is an extended guitar solo with a melancholy feel that is a fitting farewell to a person with whom he spent a lot of years.

I tend to like Blackmore’s Night’s music and Dancer and the Moon is a satisfying release. They may or may not have some creative twists and turns in their future but for now, this album will do just fine. 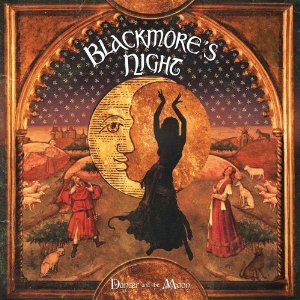 This entry was posted on Wednesday, August 28th, 2013 at 3:36 pm and is filed under Blackmore's Night. You can follow any responses to this entry through the RSS 2.0 feed. Both comments and pings are currently closed.