The great songwriting team of Jerry Leiber & Mike Stoller wrote “Kansas City” in 1952 but Little Willie Littlefield released it under the title “K.C. Lovin.” The song then disappeared for seven years.

The song was ressurrected in 1959, when six different artists released singles of the song within a two week period. Little Richard, Rocky Olson, and Hank Ballad & The Midnighters all reached the BILLBOARD Hot 100 with their versions.

It was Wilbert Harrison, however, that released the definitive version of the song and one of the classic rock songs of the 1950’s. He changed the title back to the original and played virtually every instrument himself.

It entered the Hot 100 at number 100 and became the fist song in that position to go all the way to number one. It reached the top of the charts May 18, 1959, and remained there for two weeks. It would be 10 years before he reached the Hot 100 again.

Comments Off on Kansas City by Wilbert Harrison |

Jim Campilongo has been releasing albums for close to a decade.  He is now recognized as one of the better and most creative guitarists on the music scene today. His latest album, Dream Dictionary, will be released January 21st.

He is usually known for his aggressive style but moves in a very different direction with his latest release. It is a very laid back affair. Backed by drummer Josh Dion and bassist Chris Morrissey, he settles into a grove but there is little fire as on many of his previous albums.

He is at his best when he explores melodies with such tracks as “Heaven Is Creepy” and the title tune. On the other hand, songs such as “Suppose” and “Tony Mason” find him doodling with little sense of direction. Another issue is the bass, which is turned up to loud on a number of the tracks, which detracts from his guitar playing.

Jim Campilongo has consistently demonstrated that he is an expert guitarist. Unfortunately Dream Dictionary does not live up to that accolade. If you want to explore his music, there are a number of better starting points.

Comments Off on Dream Dictionary by Jim Campilongo |

The move, Running Wild: The Life Of Dayton O. Hyde has disappeared but the music by Steve Poltz remains.

Poltz has had a somewhat eclectic career to say the least. He fronted the indie band the Rugburns, as a composer he co-wrote Jewel’s hit “You Were Meant For Me,” released a children’s album, created a CD filled with 45-second answering machine songs, and has released a number of excellent and well-received solo albums. Now he is exploring new territory as he has written the music for a film.

The subject of the film, Dayton O. Hyde, is a wild horse activist, naturalist, and cowboy poet. Now 87, his efforts at preserving wild horses and their habitats have been a lifelong pursuit.

As with most soundtrack albums, that are issued apart from movies most people have not seen, there is a disconnect between the songs. The music, which makes sense in the film now has to stand on its own and some of the tracks, especially the short connecters, are out of their elements.

There are 25 tracks by Poltz and 17 are instrumentals. While most are shorter atmospheric  pieces, two longer, fully developed songs stand out. “Happy Hour” is a nice little rocker and “El Centro” at just under five minutes is a classy up-tempo country tune.

It is the eight lyrical tracks that shine the brightest and they find Poltz on familiar ground. “Song For Hawk,” “Dirt Cowboy,” and “Mustang call” are all excellent performances in their own right and rank among the best of his career.

The final song on the album, and the only non-Poltz original, is “Phantom Love” by the band She Rose. It is a haunting ballad and fits in with the rest of the music.

It’s nice to see an artist take a chance every so often. Poltz has produced a solid album of music with a number of real high points. It deserves some attention with and without the accompanying film.

Comments Off on Running Wild by Steve Poltz | 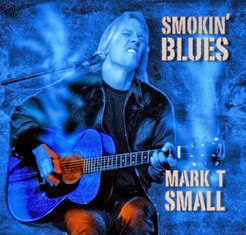 Mark T Small is one of those underappreciated blues musician and guitar warriors who has been practicing his craft for the past 40 years in blues clubs in his native New England and across the country. Every once on awhile he ventures into the studio to record his adventures. He will release Smokin’ Blues near the end of January.

He has taken a different path on his new album. It is patterned after his live show, which means it is basically a solo affair. It was recorded with the intent that the listener would feel like he or she was in a small and intimate club with Small. There is no trickery or recording wizardry as what he plays is what you hear.

The songs are those he plays on stage. They are a blues history as he brings tunes from Charley Patton, Elmore James, Howlin’ Wolf, John Lee Hooker, Reverend Gary Davis, and more back to life. His style is both traditional acoustic from the Delta and electric from Chicago. Every once in a while, however, he switches to a New Grass format with a picking style that is reminiscent of Chet Atkins.

The best introductions to his guitar virtuosity are on the instrumental s ”Buck Rag,” which was made famous by the Reverend Gary Davis and the album ending “America Medley,” on which he plays bass, harmony, and melody seemingly all at once.

Whether playing and singing such blues classics as “Moanin’ At Midnight” and “Early In The Morning” or transferring Rufus Thomas’ “Walking The Dog” to a new format, he is a blues purest. His version of Patton’s “Stone Pony Blues” is as close to prewar Delta Blues as one can get.

Mark T Small is a throwback to the blues musicians of a bygone era. He continues to practice the craft he loves in small clubs and bars. Smokin’ Blues is a fine introduction to his music.

Comments Off on Smokin’ Blues by Mark T. Small |

It all started with a song called “The Dog And The Cat.” Cortez didn’t like his vocal so he sat down at an organ in the studio and changed the melody. And so “The Happy Organ” was born

It was one of the first rock songs to use the organ as the central instrument. It was released as a single in the early spring of 1959. Cortez was touring as the keyboardist for Little Anthony and The Imperials when he received a phone call on May 11, informing him that “The Happy Organ” had reached number one on the BILLBOARD Hot 100.

He would have a couple more chart songs, the biggest of which was “Rinky Dink,” which reached number 10.

“The Happy Organ” remains a unique number one and for one week in May of 1959, it ruled the American music world.

Comments Off on The Happy Organ by Dave “Baby” Cortez |