The Best Of The Stony Plain Years By Long John Baldry 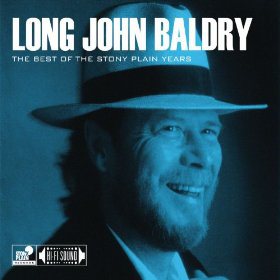 Long John Baldry, 1941-2012, was one of the key figures in the early British blues movement and thus a connector in the development of British rock and roll. He was a contemporary of early blues artists Alexis Korner and Cyril Davies and heavily influenced such artists as The Rolling Stones and Eric Clapton. During the mid-1960’s he played in bands with Rod Stewart (Steampacket) and Elton John (Bluesology).

He moved to Canada in 1978 and in 1991 formed a relationship with the Stony Plain Label. The label has now established a new compilation series titled The Best Of The Stony Plain Years.  Baldry is one of the first artists to have a CD release in the series as tracks from his albums for the label have been combined with two previously unreleased tracks.

The album begins with a creative version of “Good Morning Blues.” There is a 30 second snippet of his 1958 recording of the song before sliding into the version he recorded in 2001. The modernization of the song presents a much smoother sound and the instrumental backing is full, yet his roots are very apparent.

While the blues are painful at times; “I’m Shakin,’” “Easy Street,” and “Midnight Special,” which are presented in a row, are a joyous romp through the modern day blues. His voice has gained strength as the years have passed and has developed into a strong instrument.

His take on “Gallows Pole” is very different from the famous version by Led Zeppelin. It is a rollicking and boisterous interpretation that comes close to a traditional Americana sound.

Kathi McDonald toured with Baldry for close to two decades and she duets with him on the ominous “Insane Asylum” and the hitherto promo only release “Black Girl.”

The album ends on a high note. “Time’s Getting’ Tougher Than Tough” contains a duet with blues legend Jimmy Witherspoon with backing by The Duke Robillard Band. It all adds up to an excellent example of a modern day fusion of rock and blues.

The Best Of The Stony Plain Years presents a nice taste of the last part of Baldry’s career. The music may not be as influential or important as his early work but it is very listenable and shows the end product of his evolutionary process.

This entry was posted on Thursday, July 24th, 2014 at 4:19 am and is filed under Music Reviews: Everything Else. You can follow any responses to this entry through the RSS 2.0 feed. Both comments and pings are currently closed.