All Of You: The Last Tour 1960 (Box Set) By Miles Davis With John Coltrane 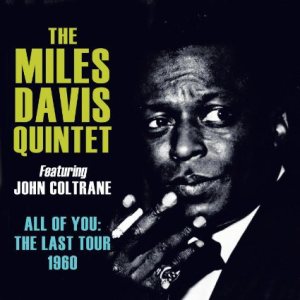 Miles Davis, (1926-1991), and John Coltrane, (1926-1967), were two giants of American music who changed and influenced the course of American jazz during the second half of the twentieth century.

Coltrane was an on again – off again member of the Miles Davis Quintet, 1955-1960. It was not always a harmonious union as they had very different approaches to music. When you listen to their solos within the context of the quintet, it is two unique, if not cohesive, statements being made next to each other. Coltrane was always looking inward for inspiration, while Davis was willing to expand outward wherever his imagination would take him. Despite their differences, everything worked and their time together resulted in some of the most exciting jazz of the era.

Their last hurrah together was a twenty date European tour in the spring of 1960. Many of the concerts were broadcast over a number of national radio networks, plus a few were privately recorded. A selection of tracks from the tour has now been released as a four-CD box set titled All Of You: The Last Tour 1960.

The sound runs the gamut from very average to good, so be prepared for an up and down experience. Sometimes the issues are as simple as microphone placement as certain instruments disappear from time to time. The good news is Davis’s and Coltrane’s solos are the clearest parts.

The box set draws from seven different dates from five countries. Everything is wisely presented chronologically so the listener can follow the bands development. This is very clear with two performances of “So What” recorded at different shows on the same date where the second is more energetic than the first. It then appears a third time where Davis takes it all into a new register.

The April 8th concert from Zurich has the best overall sound. “If I Were A Bell” is filled with ringing and inspired solos. The version of “So What” finds Coltrane moving beyond the traditional norms of the past.

When the tour ended, Coltrane would embark on his own solo career and never play with Davis again. What is left behind is this last testament of their time together.

All Of You: The Last Tour 1960 is not for the beginner. It is a set for someone who has a basic knowledge of their work individually and together. It’s fragmented nature make it a less than perfect release but there are flashes of genius, which make it a worthwhile listening experience, especially for the jazz aficionado.

This entry was posted on Friday, February 27th, 2015 at 3:37 pm and is filed under Jazz Reviews, Miles Davis. You can follow any responses to this entry through the RSS 2.0 feed. You can leave a response, or trackback from your own site.