Child Is The Father To The Man (Hybrid CD) By Blood, Sweat & Tears 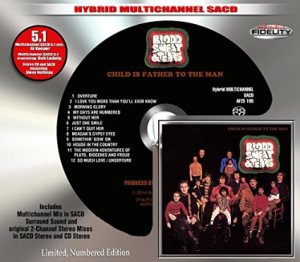 Where have you been all my life? Blood, Sweat & Tears first album, Child Is The Father To The Man, has just been released as a hybrid multichannel SACD.

Super Audio CD’s have been in existence since the late 1990’s. The original intent was for the format to replace the standard CD. While that did not happen, the enhanced sound and surround sound capability helped the format to find a niche, particularly among audiophiles.

The music of Blood, Sweat & Tears is made for surround sound. The brass combined with a traditional rock band, remastered into a pristine sound, explodes out of the speakers. Being a hybrid, it is compatible with most CD players.

I reviewed this album several years ago and my feelings about the music have not changed in the interim. It is a unique album in the Blood, Sweat & Tears catalogue. While their later albums, including their mega-selling self-titled second album had a big brassy pop sound; Child Is The Father To The Man was a more gritty affair as it fused a rock/blues approach with jazz elements. The vocals did not have the smoothness of the David Clayton-Thomas era, which lent an authenticity to the blues oriented material.

“I Love You More That You’ll Ever Know” and “I Can’t Quit Her” are unique in that they are blues songs, which are taken in different directions by the brass. They may be the peak of Kooper’s long career. While the roots of the traditional Blood, Sweat & Tears sound are present, the approach makes it a stand-alone album as Kooper and most of the brass section would depart after its release.

If you are a fan of the album or have not explored the music of the early Blood, Sweat & Tears, this SACD release is an excellent place to start sound wise, it just does not get any better.

This entry was posted on Wednesday, May 20th, 2015 at 3:09 am and is filed under Music Reviews: Everything Else. You can follow any responses to this entry through the RSS 2.0 feed. You can leave a response, or trackback from your own site.

One Response to Child Is The Father To The Man (Hybrid CD) By Blood, Sweat & Tears