My Road By Bob Margolin 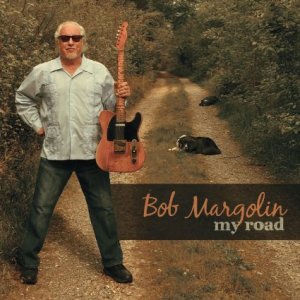 Bob Margolin has now reached the traditional retirement age but shows no sign of slowing down. He has spent a lifetime immersed in the blues. At the age of 23 he began an eight year stint as a member of Muddy Waters backing band. When viewing the Martin Scorcese film The Last Waltz, look over Waters shoulder during his performance of “Mannish Boy” and there stands a young Margolin. He formed his own band in 1980 and has been on the road and in the studio ever since.

Like many bluesmen, Margolin is a survivor. He has always been adaptable to the changing times, which has enabled him to keep his music fresh. His new album, due January 8, 2916, is an album of where he is today. He wrote or co-wrote 8 of the 12 tracks and they find him examining his life. The themes of love, mourning, and the acceptance of aging are all explored within a blues frame work. “My Road,” “Goodnight,” “Understanding Heart,” and “I Shall Prevail” are all autobiographical snippets of his life’s journey.

He always keeps it simple. He provides the lead guitar, vocals, and bass work and is supported by drummer/vocalist Chuck Cotton, and harpist/guitarist Tad Walters.

Margolin is one of those blues artists who has put together an exemplary career without selling millions of albums. He has established his legacy with hard work, tough melodies, sizzling guitar work, and thousands of performances. My Road is an album that demands the attention of anyone interested in the blues.

This entry was posted on Sunday, January 24th, 2016 at 4:19 am and is filed under Indie Music Reviews. You can follow any responses to this entry through the RSS 2.0 feed. You can leave a response, or trackback from your own site.