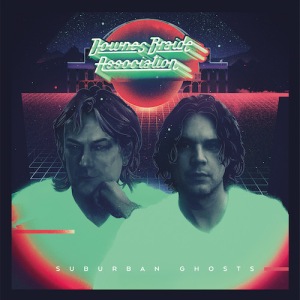 Progressive rock music veteran Geoff Downes (Yes, The Buggles, and Asia) and songwriter/singer/producer Chris Braide (Beyoncé, Brittney Spears, Christina Aguilera, and more) met several years ago and joined forces to release Pictures Of You. Now there busy schedules have allowed them to fid the time to release their second album titled Suburban Ghosts.

The lyrics are more somber and reflective than their first release but given the fact you have a songwriter/producer and progressive rock legend creating music together, the music is melodic, the harmonies tight, plus there is plenty of layering of the sound.

Songs such as the “Suburban Ghosts” trilogy, “Machinery Of Fate,” and “Dreaming Of England” are all pleasant, well produced progressive pop and rock. If Downes and Braide had more time, they could probably produce albums such as this on a regular basis as it has a laid back, smooth, and effortless feel.

In the last analysis, Suburban Ghosts may not change the course of rock music but it makes it a little more fun. A well-produced and excellent release by two veterans of the music wars.

This entry was posted on Tuesday, December 13th, 2016 at 2:53 pm and is filed under Music Reviews: Everything Else, Uncategorized. You can follow any responses to this entry through the RSS 2.0 feed. You can leave a response, or trackback from your own site.