All Night Live By The Mavericks 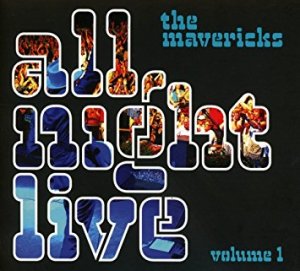 The Mavericks are difficult to pigeon hole stylistically. They cross a lot of musical boundaries as they explore country, rock, blues, and even a little Latin vibe. The one constant is their live shows. They remain one of the best stage bands in American popular music. Their latest album, All Night Live Volume 1, brings their show to CD.

They wisely add some additional musicians to give their live sound some extra flexibility. Michael Guerra (accordion), Mike Abrams (sax), Matt Cappy (trumpet), and Ed Friedland (upright bass) add extra layers and textures to the sound. It all adds up to an energetic romp through 16 of their songs.

My only real problem with the release is the sound. Given the excellence of modern technology, it should have been better and it detracts from the overall enjoyment of the music. A smaller issue is the song section as it comes primarily from two albums. I would have preferred a more career spanning collection.

Other than the above; the album is a good presentation of their energetic live sound. The opening title track is a horn-laden blast that builds as it progresses. They almost move in a big band direction with a swinging version of “Stories We Could Tell.” They move to a blues vibe with the smoldering “Do You Want Me To.” The only cover song is a laid back version of Neil Young’s “Harvest Song.”

All Night Live Volume 1 retains the energy of the Mavericks on stage. Sound aside, it presents live music as it should always be.

This entry was posted on Tuesday, March 21st, 2017 at 2:32 pm and is filed under Country Album Reviews. You can follow any responses to this entry through the RSS 2.0 feed. You can leave a response, or trackback from your own site.