In Session By Robbie Krieger 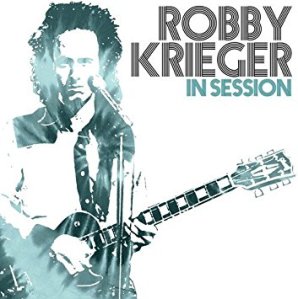 Robbie Krieger’s place in rock and roll history is secure. He was the guitarist for the legendary Rock And Roll Hall Of Fame band The Doors. He also co-wrote many of their most famous songs including “Light My Fire,” “Love Her Madly,” “Love Me Two Times,” and “Touch Me.”

He is known as one of the best guitarists of his generation. He maintained an off again-on again relationship with fellow Doors bandmate Ray Manzarek until the latters death. His solo career has traveled in a number of directions including rock, jazz-fusion, and experimental. He has now released the eighth studio album of his career titled In Session.

Krieger has just produced the most commercial album of his career. In Session is also a simple album.  It is a group of catchy songs on which he is joined by a number of guest artists including Jackson Browne, Nik Turner, Billy Sherwood, Tommy Shaw, Rod Argent, and even William Shatner, which was not as bad as it sounds.

“Where We Belong” with Tony Kaye, “Brain Damage” with Geoff Downes, and in one of the last performances of his life “All You Need Is Love” with John Wetton provide edgy partnerships for Krieger’s rock and roll approach. Jackson Browne with “Across The Universe” and Tommy Shaw of Styx with “Don’t Leave Me Know” provide a lighter side to his music.

The only two misses are an out of place performance of “The Little Drummer Boy” and a terribly recorded live version of “Back Door Man.”

Krieger’s previous solo efforts have always been serious affairs. In Session is just plain fun and enjoyable and that makes all the difference.

This entry was posted on Thursday, August 3rd, 2017 at 3:12 pm and is filed under Doors Reviews. You can follow any responses to this entry through the RSS 2.0 feed. You can leave a response, or trackback from your own site.