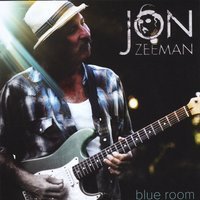 Jon Zeeman is a guitarist who has a sound, that once you hear it, is instantly recognizable. He has just released his latest album titled Blue Room. It includes seven original tunes and thee cover songs.

He is basically a blues guitarist who fuses some rock elements into his approach. This is clearest on his interpretation of the Jimi Hendrix song “Still Rainin’ Still Dreamin’ on which he moves effortlessly though a number of styles.

While he has a backing band, the sound moves from sparse to full. This is especially the case when he plays his guitar off the keyboards. Also of note is the late Butch Trucks, whose drumming appears on two tracks, “All I Want Is You” and “Next To You.”

He is an excellent songwriter and is able to create melodic blues. “Talking ‘Bout My Baby,” “If I Could Make You Love Me,” and “Hold On” are good examples of his style. There is also a gritty cover of the Robert Johnson blues classic “Love In Vain,” which is just right for a small smoky bar late at night.

Joe Zeeman has produced a solid album of blues. It is worth a listen or two.

This entry was posted on Wednesday, September 6th, 2017 at 2:57 pm and is filed under Indie Music Reviews. You can follow any responses to this entry through the RSS 2.0 feed. You can leave a response, or trackback from your own site.