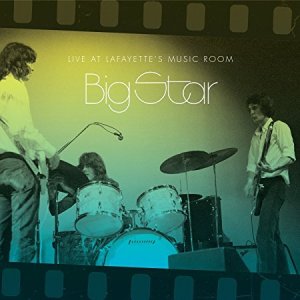 Since the death of Alex Chilton, there is been a proliferation of Big Star releases, both solo and as a band.

There has not, however, been many live releases by Big Star. Nine years ago Live At Lafayette’s Music Room was a part of a box set. It now returns as a stand alone and remastered release.

The 19 tracks set draws on material from their first album and unreleased second. The interesting dynamic is they performed as a trio and so had to compensate for Bell’s absence. It gave the music a different twist as the three musicians had to stretch to create their signature sound.

Another interesting dynamic  is they were the opening act for the soul group Archie Bell & The Drells. The sparse audience was a soul crowd and the reaction to Big Stars set was minimal.

The harmony parts are a stretch at times as there is a voice missing. The lead vocals are fine and the band compensates for the missing guitar parts. They wisely add in covers by the Kinks, Todd Rundgren, The Flying Burrito Brothers, and T. Rex, which are geared to the three of them.

The sound has been remastered but it is what it is. Why this odd and obscure concert was recorded in the first place remains a mystery.

Live At Lafayette’s Music Room is a glimpse into an unusual period of the Big Star Story. It should be a fan pleaser but for an introduction to the band, any of heir early studio albums is superior.

This entry was posted on Thursday, September 19th, 2019 at 2:30 am and is filed under Big Star Reviews. You can follow any responses to this entry through the RSS 2.0 feed. You can leave a response, or trackback from your own site.