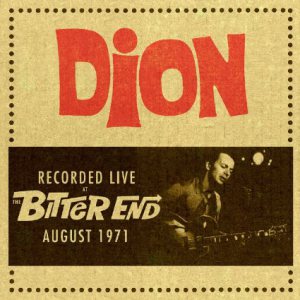 Dion DiMucci will probably always be remembered for his series of hits, with and without the Belmonts, during the late 1950’s and early 1960’s. Songs such as “The Wanderer,” “A Teenager In Love,” “Lovers Who Wander,” “Ruby Baby,” “Donna The Prima Donna,” and the number one “Runaround Sue” were some of the best and catchiest tunes of the pre-Beatles era. As with many artists, the hits came to a halt with the advent of the British Invasion.

The second part of his career began when his late 1968 release, “Abraham, Martin And John” became a huge hit single. During the course of the next seven years, he would release five albums for the Warner Brothers label that were simplistic and folk oriented.

His third album for the label, Sanctuary, contained three live tracks from a 1971 performance at the Bitter End Club in New York City. The rest of that live set sat in the vaults until now as the complete concert has finally been released.

This is not the Dion of the early phase of his career. He accompanies himself with just his guitar. The song selection is from the folk songbook of the day. The music ranges from straight folk to a real bluesy feel. His covers run the gamut from Bob Dylan’s “One Too Many Mornings” to the Beatles “Blackbird,” to Lightning Hopkins “Drinkin’ That Wine” to Leonard Cohen’s “Sisters Of Mercy.” He even reaches back into his past for acoustic versions of “Ruby Baby” and “The Wanderer.”

It all adds up to a gentle, if somewhat dated approach. The emphasis is on the lyrics. In some ways his voice is a little to smooth for a folk artist but it was a wonderful instrument back in the early 1970’s.

Recorded Live At The Bitter End August 1971 is a nice trip back in time to a far different era. It presents an artist making a career change toward music that mattered at the time.

Sometimes a career and a life can be affected by seemingly insignificant decisions. Dion had just finished a concert with Buddy Holly on February 2, 1959, in Clear Lake, Iowa. Afterwards Holly rented a private plane to fly him to the next concert and offered a seat to Dion for the sum of $36. Dion declined because that was the same total his parents had been paying for rent on their apartment and he thought it not right to spend that much on a plane ride. Everyone who did pay the $36, unfortunately, was killed about five minutes after take-off. Dion would go on to become of the most popular artists of the pre-Beatles era and he remains active today.

Dion DiMucci was born in the Bronx, New York City, and honed his vocal skills singing on street corners and in schoolyards. His early career with his backing group, The Belmonts, and as a solo artist, produced a number of classic Doo-wop songs.

His two most famous singles, “Runaround Sue” and “The Wanderer,” were both issued in 1961. The first climbed to number one on the Billboard Pop Singles Chart and the second reached number two. Both were included on Rolling Stone Magazine’s list of The 500 Greatest Songs of All Time.

“Runaround Sue” topped the American music world for two weeks beginning October 23, 1961. This time around Dion used the Del-Satins for his backing group. The song was an uptempo fusion of Doo-wop and classic pop. Its lyrics told the story of an ex-girlfriend who had commitment issues and preferred playing the field or, as the song says, running around. The plaintive, introductory vocal is followed by backing vocals and a beat setting up the song’s foundation, and then Dion’s voice kicks in again on top of the beat.

Its catchy hooks and memorable storyline has helped it to remain one of the more memorable songs of its era and, back in ’61, the song was perfect AM radio fare and a deserved chart-topper.

Dion was elected to the Rock And Roll Hall of Fame in 1989. Looking back at his life and career, his turning down of Buddy Holly was the best $36 he never spent.

Comments Off on Runaround Sue By Dion | 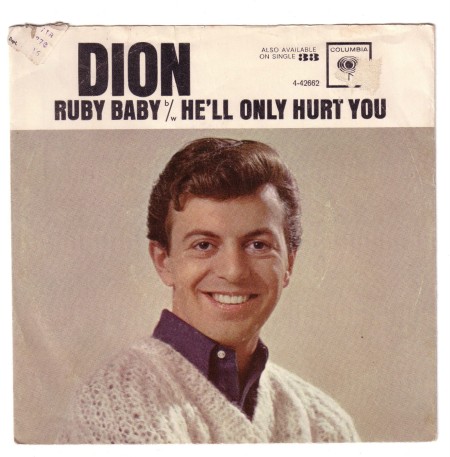 Dion is best remembered for his series of hit songs for the Lauire label, 1958-1962. “The Wanderer,” “A Teenager In Love,” “Lovers Who Wander,” and the number one “Runaround Sue” were some of the catchiest and biggest hits of the early 1960s. He he returned to the label several years later and had a far different sound. He had another hit with the folk type song, “Abraham, Martin, And John.”

Right in the middle of these two periods of his career, he was signed to the Columbia label. His material for the label moved away from this early doo-wop sound and toward a rocp/rock style.

His material during this period of his career is often over looked but late in 1962 he released a cover of a 1956 rhythm & blues hit for The Drifters, “Ruby Baby.” It was a smooth pop rendition and peaked at number two on the BILLBOARD MAGAZINE Pop Singles Chart. His material for the Columbia label may not be as well known but it is well-worth seeking out.

Comments Off on Ruby Baby 45 by Dion |

The Complete Laurie Singles by Dion

Dion DiMucci, with and without the Belmonts, is best remembered for his series of doo-wop type hits during the late 1950s and early 1960s. Songs such as “A Teenager in Love,” “Runaround Sue,” and “The Wanderer” remain a recognizable part of the pre-Beatles rock and roll era.

One important decision led to his 50+ year career and 1989 induction into The Rock And Roll Hall Of Fame. He had performed with Buddy Holly, February 2, 1959, in Clear Lake, Iowa and was offered a place on a plane that would fly them to their next gig instead of enduring a cold bus ride. The cost of $36 was the same as his parents had paid per month for their apartment so he turned the offer down. A few hours later everyone on the plane was dead when it crashed just after takeoff.

Real Gone Music has recently released a two-CD set titled The Complete Laurie Singles. It gathers all the A- and B-sides of his singles from both of his tenures for the label. The music was remastered from the original tapes and is presented in a glorious mono sound. The accompanying booklet contains an essay of his music. Written by Ed Osborne, with input from Dion, it is about as complete as one can get. My only complaint is that the set does not include his singles with The Belmonts, which were also released on the Laurie label.

His big hits are very familiar to fans of early rock and roll. They tended to be up-tempo with prominent guitar, sax, and drums providing the foundation for his soaring vocals. The messages may have been simple but the music made you smile and was perfect for AM radio at the time as it stayed in your mind.

Some of the lesser known sides have rarely, if ever, been released on CD. “Kissin’ Game,” “Runaway Girl,” “Little Girl,” “Lost for Sure,” and “King Without a Queen” are nice deeper looks into the Dion catalogue.

Dion signed with the Columbia label during late 1962 and when he returned to Laurie in 1968 his sound was very different. He recorded some material that had a folk bent and even experimented in places. “Abraham, Martin, and John” was just about the perfect song for 1968 as Dion sang about the end of innocence as The Vietnam War was expanding. He also recorded the classic folk tunes, “From Both Sides Now” and Fred Neil’s “The Dolphins.” He really stretched out of his musical norm with a rendition of the Jimi Hendrix classic, “Purple Haze.”

Now in his early 70s, Dion is still on the road and active in the studio. The Complete Laurie Singles traces two distinct periods of his career, which includes most of his popular material. It is a must for anyone interested in Dion or either of the eras.

Comments Off on The Complete Laurie Singles by Dion | 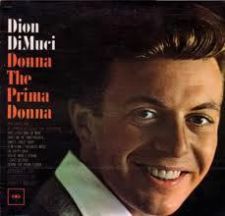 Dion DiMucci gained fame during the late 1950s as the lead singer of Dion & The Belmonts. They would be inducted into The Rock And Roll Hall Of Fame in 1989. Dion would go solo in 1960 and the hits would continue to come throughout the rest of the decade.

“Donna The Prima Donna” is sometimes a forgotten song. It was about as close to rock ‘n roll as Dion would come. It first reached the BILLBOARD MAGAZINE Pop Singles Chart during mid-September of 1963 and eventually became a big hit peaking at number six.

Not only was it a good listen but was one of the first records I ever bought.

Comments Off on Donna The Prima Donna 45 by Dion DiMucci | 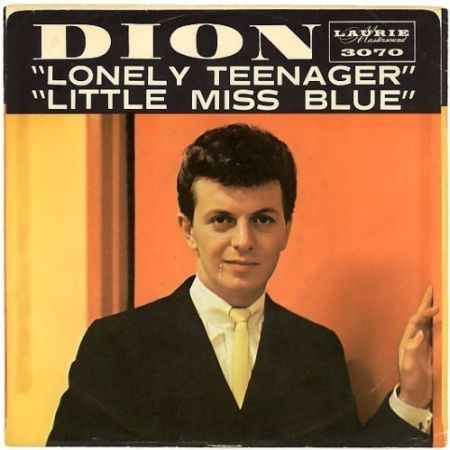 Dion DiMuci rose to fame as the lead siner of Dion & The Belmonts, 1957-1960. They produced such huge hits as “The Wanderer” and “Runaround Sue.” They were elected to The Rock And Roll Hall Of Fame in 1989.

In 1960, Dion left for a solo career and the hits kept coming during the first half of the 1960s.

His first solo hit reached the BILLBOARD MAGAINE Pop Singles Chart October 17, 1960 and peaked at number 12. Dion continues to perform and record down to the present day.

Comments Off on Lonely Teenager 45 by Dion |

Runaround Sue 45 by Dion and The Belmonts

Dion, with the Belmonts and solo, placed 33 singles on the BILLBOARD MAGAZINE Pop Singles Chart. His career almost ended during 1959. He was touring with Buddy Holly and turned down a seat on the plane ride that took the life of Holly, The Big Bopper, and Ritchie Valens.

The biggest hit of his career, and his only single to reach number one, was “Runaround Sue.” Released September 25, 1961, it spent three weeks on top of the American music world.

It was an infectious upbeat song that was a cross between doo-wop and polished pop. It remains one of the definitive songs of the early 1960s, pre-Beatles era.

Comments Off on Runaround Sue 45 by Dion and The Belmonts |