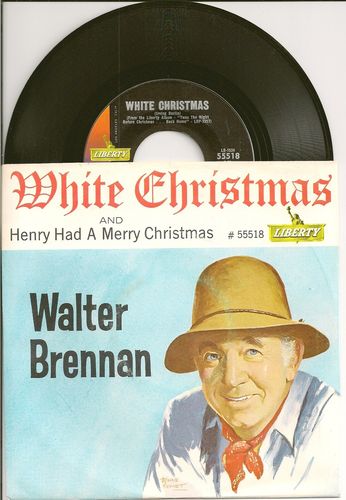 Walter Brennan, 1894-1974, is primarily remembered as a television character actor. If you are a little older you may remember him as a three time Oscar winner in the Best Supporting Actor category. He also had an unlikely recording career as his first chart single came at the age of 66. He ultimately had four singles make the BILLBOARD MAGAZINE Pop Singles Chart.

Just about everybody, it seems, released a version of “White Christmas.” Brennan’s recordings were always folksy in style and sometimes more spoken than sung. He released his “White Christmas in the early 1960s and it did not chart. Still, not bad for an older guy.

Comments Off on White Christmas 45 by Walter Brennan |

It is forgotten many times that he was a successful recording artist who had a number of hit songs.

“Personality” was a smooth song in the big band tradition. Released as a single, it reached number one, March 9, 1946. It may have only had one week on top of the music world but very few songs actually make it to the top of the mountain.

Comments Off on Personality 78 by Johnny Mercer |