Tossin’ And Turnin’ by Bobby Lewis

“I couldn’t sleep at all last night” were the words that began one of the biggest hits of the 1960s.

If you had given me a list of the songs that reached number one on the Billboard Magazine Pop Singles Chart during 1961 and asked me to pick the biggest hit of the year, I would have chosen either “Runaway” by Del Shannon or “Blue Moon” by The Marcels. I might have even picked “Travelin’ Man” by Ricky Nelson but would have passed over “Tossin’ and Turnin’” by Bobby Lewis. That would have been an error on my part as not only was it 1961′s number one song but was the third biggest single hit of the decade, which included all the hits of the British Invasion.

“Tossin’ and Turnin’” was released April 24, 1961, and would remain on the Billboard Pop Singles Chart for 23 weeks. It reached number one, July 10, and topped the chart for seven weeks. That was just a warm-up for its stay on the Rhythm & Blues Chart where it remained in the top position for nine weeks.

Bobby Lewis was born somewhere between 1925 and 1933, depending on who you believe. He was adopted at age 12 and grew up in Detroit. He released his first single during 1952, and by the end of the decade had become a fixture on the New York City club scene. He only had one other Top 40 pop hit but continued to perform regularly for decades. Despite sight problems and advancing age, he still performs occasionally.

His last attempt at a hit single was his release of “I’m Tossin’ and Turnin’ Again,” but with no luck.

“Tossin” and Turnin’” has appeared on hundreds of oldies compilation albums down through the years, the royalties of which, have enabled Bobby Lewis to sleep very well.

Comments Off on Tossin’ And Turnin’ by Bobby Lewis | 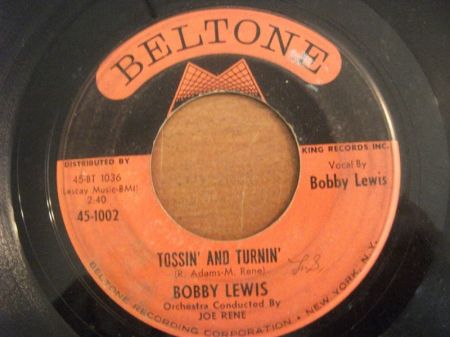 Bobby Lewis was born during 1925 or 1933 depending upon who you ask. His career now spans over a half century. He has had only two top ten pop hits. “One Track Mind” reached number nine on the BILLBOARD MAGAZINE Pop Singles Chart but it was his other hit that was one of the biggest of all time.

The line; “I Couldn’t Get To Sleep At All Last Night,” was heard millions of times during the summer of 1961.