The Story Of My Life 45 by Marty Robbins 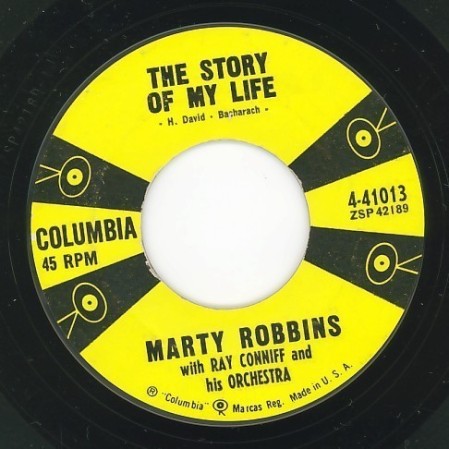 Marty Robbins started out as a Rockabilly singer and ended up as a country superstar. His GUNFIGHTER albums during the late 1950s and early 1960s crossed over to the pop charts and were influential in expanding country music beyond its small traditional base.

During the mid-1960s he released a number of what cas best be described as pure pop songs that had success on the BILLBOARD MAGAZINE Pop Singles Chart.

He released “The Story Of My Life” November 11, 1957 and it rose to number 15 on the pop chart. It was also the first Burt Bacharach song to become a hit.

It was a story song that contained a smooth vocal vocal. While his country work would over shadow this ealy hit, it remains one of his best performances.

24 hours From Tulsa 45 by Gene Pitney

Gene Pitney, the Rockville Rocket, was inducted into The Rock And Roll Hall Of Fame in 2002. He was one of the few American artists who remained popular during the British Invasion era, placing 24 singles on the BILLBOARD MAGAZINE Pop Singles Chart during the 1960s.

Four of his first ten chart hits were written by Burt Bacharach and Hal David.”Twenty Four Hours From Tulsa” was released October 19, 1963 and would reach number 17 on the BILLBOARD Charts.

Pitney had a unique, booming voice, that had incredible range and a high register. Here it just soars on this mid-tempo number.

Pitney’s career would fade during the seventies but he would remain popular in Europe and Australia. He would die of a heart attack while on tour of England during 2006.

Comments Off on 24 hours From Tulsa 45 by Gene Pitney |