The Best Of The Dualtone Years By Guy Clark 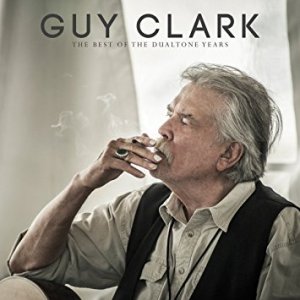 Guy Clark died almost a year ago. His passing took away one of American Music’s greatest troubadours. Best known as a songwriter whose compositions were covered by the cream of country and folk artists; he nevertheless released nearly 20 albums of his own. He had a wonderful capacity to turn thoughts and pictures into words and music and his last studio release, My Picture Of You won a Grammy Award in Best Folk Album Category.

The last label of his long career was Dualtone. His new release, The Best Of The Dualtone Years, draws from his studio albums for the label, plus some live tracks, and adds three unreleased demos, which are combined into an essential Americana two-disc release.

His composition s run the gamut from love songs, “My Favorite Picture Of You,” to romance, “Cornmeal Waltz,” to the expression of his wry sense of humor, “Hemingway’s Whiskey.”

The live tracks get to the heart of who he was as a musician and singer. While I would have preferred to have the five live tracks together rather than interspersed throughout the album, they present some of his most famous compositions in a very personal way. “L.A. Freeway” and “Dublin Blues” helped to define what Americana music is all about and “Homegrown Tomatoes” and “The Cape”  are examples of how he viewed the world around him.

The unreleased demos, “Just To Watch Maria Dance,” “The Last Hobo,” and “Time” are stripped down to basics and present a good example of his writing process.

Guy Clark left behind a catalogue of wonderful glimpses of the world around him. The Best Of The Dualtone Years is a fine introduction to his music and is not only a good release in its own right but will hopefully inspire people to delve deeper into his music.