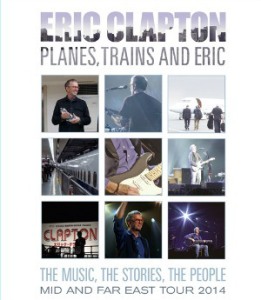 So, what has Eric Clapton been up to lately? Well he has been on tour and the good news is he brought some recording equipment along. The result is the Planes, Trains, And Eric, which chronicles the tour with 17 performances, plus interviews with Clapton and band members, rehearsals, and sound check footage.

Clapton is now over 50 years into his career and has performed live thousands of times and has issued dozens of live albums. This newest DVD release may contain material that has been released a number of times but the DVD allows you to see Clapton rather than just hear him and that makes all the difference.

The performances are taken from his early 2014 tours of the mid and far east, which included his 200th concert in Japan. Now approaching 70, we have a Clapton who is engaged and dedicated to his craft. His backing band included drummer Steve Gadd, keyboardist Paul Carrack, bassist Nathan East, keyboardist Chris Stainton, and backing vocalists Michelle John and Shar White; many of whom have toured with Clapton for years and form a tight knit and proficient unit.

One of the issues with Clapton live is sometimes he tends to disappear. That is not the case here as he is the lead guitarist with two keyboardists and is forced to carry the sound. He dips back into his past with scintillating solos on “Pretending” and “Little Queen Of Spades.”

The songs are familiar. “I Shot The Sheriff,” “Wonderful Tonight,” “Crossroads,” “Tears In Heaven,” “Before You Accuse Me,” and “Cocaine” may not contain a lot of surprises but they are played with passion and energy. Clapton is flawless on the guitar, which may be one of his problems as he makes it all look so easy.

The extras give a good look into his touring process and give it all an intimate feel. The interviews are interesting viewing for one time but the rehearsal footage and sound checks give everything a unique feel.

Planes, Trains, And Eric, the DVD, may not add anything brand new to Clapton’s legacy but it contains an excellent look into Clapton on tour plus contains a lot of good music and at 52 years into his career, that is more than enough.