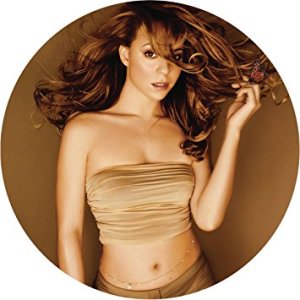 During the 1990’s, Mariah Carey ruled the pop music world. While her commercial appeal diminished during the 2000’s, her sales of 200,000,000 plus albums, makes her the biggest selling female artist of all time.

Her early albums were pop oriented but in 1997, the release of Butterfly signaled a change of direction. It has a more urban feel as her style moved toward hip hop and rhythm & blues. Now to commemorate the 20th anniversary of its release, Butterfly has been re-issued as a limited-edition picture disc.

Picture discs have been around for decades. They are issued more as collectibles than records that are actually played. Early picture discs had audio issues as the different colors of the vinyl affected the sound. Modern technology has mostly cured that problem.

Carey really came into her own as she co-wrote 11 of the 12 tracks. The only exception was a cover of Prince’s “The Beautiful Ones, on which she shared vocals with Dru Hill.

The number one hit “Honey” fueled the album’s new direction. “My All,” “Babydoll,” “Whenever You Call” and “Outside” solidified her new approach.

Today the album may seem a little dated and mild but at the time of its release it pushed the envelope of popular music as it began the fusion of pop, rhythm & blues, and hip hop.

This numbered edition of Butterfly is a visual collectible and basically for the hard core Mariah Carey fan. If you want a copy of the album to actually play, they are cheaper versions available.

The Ballads by Mariah Carey

I am sort of outside the Mariah Carey appreciation generation or put another way I am old. As such, I am a lot more attracted to her slower songs rather than her up-tempo material. That makes her latest release, The Ballads, a perfect album for me.

Mariah Carey is now almost twenty years into her career and has carved out quite a musical legacy. She was the first artist to have her initial five single releases all reach number one. She has just passed Elvis Presley for the solo artist with the most number one hits in The United States plus she has now sold over 200 million albums worldwide.

The Ballads gathers 18 well known tracks from her years with the Columbia Label into one package. While the album purports to be comprised of only slower material, the songs are different enough to make the sound varied and interesting. In addition the inclusion of five duets enhances the listening experience and further diversifies the music. While such songs as “Always Be My Baby,” “How Much,” “Dreamlover,” “Thank God I Found You,” and especially “The Roof” pushes the definition of ballad; overall they fit in fine with the concept of the album.

Even for someone like me who has mainly been exposed to Mariah Carey while listening to the radio in my car, the songs are instantly recognizable and I have to say enjoyable. “Hero,” “I’ll Be There,” “I Still Believe,” “Endless Love” with Luther Vandross, and “Vision Of Love” cover familiar ground. I even enjoyed hearing her duet with Boys II Men, “One Sweet Day,” which was played to death in the mid 1990s.

This release is a different type Mariah Carey album. Without her faster and hip hop songs, it is smoother as it puts the focus squarely on her vocals which has always been her greatest attribute and saving grace..

The only downside to the album is that the material has all been previously released and is readily available. If, however, you have only dabbled in her large catalogue of releases or appreciate the concept behind this compilation then it should be a definite buy.

In the final analysis The Ballads stands on its own as a celebration of two decades of some of Mariah Carey’s best work. It should appeal to young and old alike and expand her appreciation society by at least a generation.

Comments Off on The Ballads by Mariah Carey |