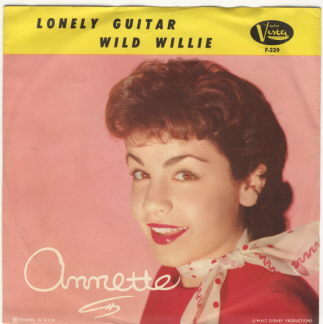 Annette Funicello became a teen or pre-teen idol during her time with The Mickey Mouse Club during the 1950s. She continued her idol status during the 1960s as the star of the series of BEACH PARTY movies.
In between, 1959-1961, she established a credible singing career, recording a number of albums, plus placing 10 singles on the BILLBOARD MAGAZINE Pop Singles Chart.

“Lonely Guitar” was not her biggst hit as it only reached number 50 during its 11 weeks on the Pop Singles Charts, yet it contained one of her better vocals.

The picture sleeve showed Annette just between being a teenager and a woman. It spoke to millions of late 1950s teenagers who were also growing up at the time.

Comments Off on Lonely Guitar 45 by Annette |

How Will I Know My Love 45 by Annette

Annette Funicello will always be remembered for her time with the MICKEY MOUSE CLUB and as the star of the BEACH PARTY series of movies. She also released a number of singles and albums, which proved popular and commercially successful.

“How Will I Know My Love” was her first single release. It was issued during 1958 right in between the finish of the MICKEY MOUSE CLUB and before she began her string of BEACH PARTY movies.

The single received no chart action despite it being a nice peepy ballad. It would, however, set the table for the music that would follow.