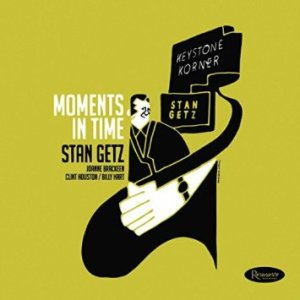 Moments In Time is a companion album to the recently released Getz/Gilberto ’76. During May of 1976, Stan Getz and his backing trio spent a week at San Francisco’s Keystone Korner Jazz Club. What made his stay so unique was his ability to coax reluctant live performer Joao Gilberto on stage to perform. Joao and Gilberto would perform together in the middle of the group’s set. The beginning and the end of the performances would just be the Stan Getz Quartet.

The first release covered the duo together and focused on their Bossa Nova work of a decade earlier. Now, the performances of saxophonist Getz, pianist Joanne Brackeen, bassist Clint Houston, and drummer Billy Hart are presented for the first time after sitting in the vaults for nearly four-decades.

Getz without Gilberto returns to a more straight-forward approach. He was about to enter one of the most creative periods of his career and these tracks show a mature musician practicing his craft with a group of musicians who were talented but who would rarely play together again as a quartet.

Tracks such as “Summer Night,” “The Cry Of The Wild Goose,” “Con Alma,” and “Morning Star” all find a relaxed Getz telling a story with his music.

Moments In Time is an apt title as it presents a glimpse of a jazz master at his live best.