I’m A Believer By The Monkees

At the beginning of November 1966, The Monkees had a new television show and a number one hit. “The Last Train To Clarksville” spent one week at the top of the charts.

By the end of the year, The Monkees were stars and their commercial popularity rivaled that of the Beatles. They also had a new number one hit. “I’m A Believer” reached the top of the charts, December 31, 1966, and remained there for seven weeks.

There was still controversy about their involvement in the creation of the music and remains so to this day. Still, they produced one of the biggest hits of the decade.

Good Times CD By The Monkees

Hey Hey We’re The Monkees! Who thought the Monkees would release a new album nearly 50 years since their television show ended, 20 since their last studio release, and four since the passing or member Davy Jones.

I didn’t think Mickey Dolenz, Michael Nesmith and Peter Tork had it in them but they have channeled the 1960’s and created an excellent album of sunshine pop. It is not an album they covers new ground but it will put a smile on your face. They managed to fuse Dolenz’s pop sensibilities, Tork’s quirkiness, and Nesmith’s realistic creativity into a smooth and bright pop mix.

The album begins with the title track and “You Bring The Summer,” which immediately transports the listener back in time. Their vocals may have aged a bit as befitting people entering their 70s but they have acquired a nice patina.

It is “Me & Magdalena” that establishes the album as a cut above the norm. The memorable melodies combined with the spot on harmonies make it one of the better pop songs of the year.

“Birth Of An Accidental Hipster” is a fun-filled psychedelic pop song similar to the ones they were so good at producing during the second part of their original career but are often overlooked because of their huge pop hits of the day. “I Was There (And I’m Told I Had A Good Time)” is a somewhat tongue in cheek glance at their past.

Davy Jones is remembered with his vocal on Neil Diamond’s Love To Live.” It may not be the albums best track but certainly it’s most poignant.

The Monkees had the wisdom to not try and create a masterpiece or even get too creative. They just did what they do well and it equals Good Times both for the title and their fans.

He was also a songwriter who composed over 200 songs. Possibly his most famous song was “Daydream Believer,” which became a number one hit for The Monkees.

Many times he would make fun of “Daydream Believer” in concert but he also released it as a single. It did not receive any chart action but he continued to collect royalties from the more famous version until the end of his life.

Comments Off on Daydream Believer 45 by John Stewart |

D.W. Washburn 45 by The Monkees 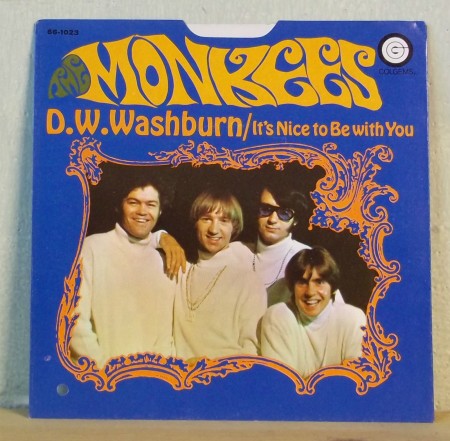 The Monkees may have been a pre-fabricated group made for television but during 1966 there popularity rivaled that of The Beatles. Their first two single releases, “Last Train To Clarkesville” and “I’m A Believer” both reached number one on the BILLBOARD MAGAZINE Pop Singles Chart. “I’m A Believer” was the number one single of the year.

Their original career only lasted three years as once their TV show was canceled their commercial success began to decline.

It was not as catchy as many of their hits and in some ways it seems as if the band was just going through the motions. While they would disband during 1969, there would be reunions in the 1980s and 1990s.

Comments Off on D.W. Washburn 45 by The Monkees |

Daydream Believer 45 by The Monkees 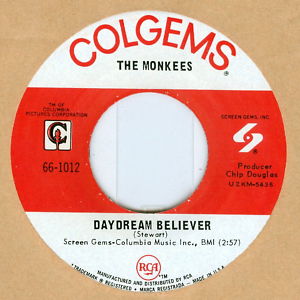 The Monkees had three number one hits during the height of their career. “Daydream Believer” was the last of the three and was released November 18, 1967. It would top The United States singles charts for 4 weeks.

“Daydream Believer” was their type of typical lightweight pop and while it may not have been essential to the history of rock ‘n’ roll, it was a pleasant listen at the time.

Many music fans today forget just how popular The Monkees were for a three year period. Their sales rivaled those of The Beatles. “Daydream Believer” remains one of their best remembered songs.

Comments Off on Daydream Believer 45 by The Monkees |

I’m A Believer 45 by The Monkees

In retrospect its difficult to believe The Monkees were as popular as the Beatles for a couple of years. Mickey Dolenz, Peter Tork, Michael Nesmith, and Davey Jones had their own television show, 1966-1968, and used it as their springboard to massive success.

They were basically a pop band who produced catchy songs. “I’m A Beliver” released December 10, 1966, would become their biggest hit spending seven weeks in the number one position on The American singles chart.

The song was written by Neil Diamond and the lead vocal was by Mickey Dolenz. It remains the lightweight side of the late sixties and a sunny counterpoint to much of the music that was being produced at the time.

Comments Off on I’m A Believer 45 by The Monkees |

Last Train To Clarksville 45 by The Monkees 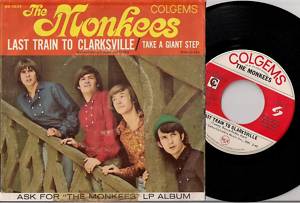 The TV series last 1966-1968 and was immensely popular for a time. The Monkees would sell millions of albums and 45’s with their light pop/rock sound.

Their first single would launch the group in style. “Last Train To Clarksville” would stay on the singles chart for fifteen weeks and reach the number one position for a one week stay.

It was only the beginning for a short but extremely successful career.

Comments Off on Last Train To Clarksville 45 by The Monkees |