Road To Forever by Don Felder 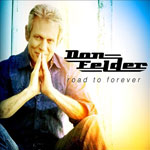 Don Felder returned last year, which may be a little unfair as he really never went anywhere. He is best remembered for his two stints as a member of the Eagles during the periods of 1974-1980 and 1994-2001. As such, he was a part of such classic albums as On The Border, One Of These Nights, Hotel California, and The Long Run. While he has remained active in the music industry, this is his first full studio album since 1983’s Airborne.

I wasn’t sure what to expect after all these years, but the quality of the music was beyond my expectations. It is an album of excellent and straight forward rock and roll, plus the songs have a personal touch as he brings elements of his life to the lyrics.

His guitar sound is distinctive and still has elements of the Eagles in it. The music, however, has a much harder edge than that of his former band. While the music has sophistication, it remains at its foundation, a guitar centered album. Songs such as “Wash Away” and “You Don’t Have Me” have solos that quickly prove just how good a guitarist Felder can be.

He may not have the strongest voice but it is more than adequate to carry the album. Again it has an Eagles quality to it and one can see how it was an important part of their harmonies. Whether it is slower tunes or high energy fueled rockers, it is more than acceptable and satisfactory.

He calls in some favors from some well-known names. David Crosby, Stephen Stills, and Graham Nash bring their voices to “Fall From The Grace Of Love.” Likewise, Tommy Shaw of Styx lends a hand on “Heal Me” and “Wash Away.” Throw in David Paich and Steve Porcaro of Toto, Randy Jackson, and Steve Vai and you have a number of friends who provide support for his music.

Maybe Road To Forever will begin to put the Eagles in his rear view mirror, especially since he was not invited to participate in their latest tour. It confirms that he is still an extremely talented musician and is well worth a listen.

Comments Off on Road To Forever by Don Felder |