Shake, Rattle and Roll by Bill Haley & The Comets 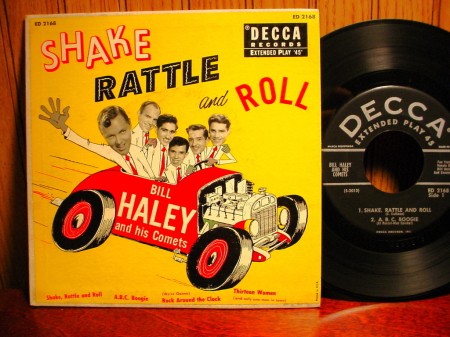 Bill Haley formed the Comets during 1952 and they remained his backing band until his death in 1981.

Big Joe Turner released “Shake, Rattle And Roll” during the summer of 1954. It topped the Rhythm & Blues Charts for four weeks and crossed over to the Pop Chart where it peaked at number 22. It remained in the Top 40 for 27 weeks.

Bill Haley added guitars, a thumping bass line, and a saxophone and released his own version several weeks after Turner. His single reached number seven on the BILLBOARD Pop Chart. Some people consider it the first rock song to become a big hit.

Comments Off on Shake, Rattle and Roll by Bill Haley & The Comets |

Mr. Sandman by The Chordettes

1954 was comning to an end and The Chordettes would have the last number one song of the year and the first of 1955. Their “Mr. Sandman” would be the only number one song of their career and while not issued during the rock and roll era, it would always be associated with that time period.

The Chordettes formed during 1946 as a folk group similar to The Weavers but quickly evolved into a traditional vocal group. There were a number of personnel changes but the four some that sung on “Mr. Sandman” were Janet Ertel, Carol Buschmann, Dorothy Schwartz, and Lynn Evans.

It was a huge hit topping all three BILLBOARD MAGAZINE Charts.

The Chordettes would almost make it back to the top of the charts in 1958 when “Lollipop” spent two weeks at number two. They would disband in 1961.

Comments Off on Mr. Sandman by The Chordettes |