Harrison, producer Lynne, along with Orbison and Petty gathered in the studio to record a B side to Harrison’s single “This Is Love.” The resultant song “Handle With Care” was so good that it was decided to release it on its own under the Traveling Wilburys moniker complete with fictitious names. Dylan later joined to make the group a quintet. Jim Keltner as Buster Sidebury was the drummer.

The result of all the tongue-in-cheek shenanigans was some of the best pure rock/pop of the late 1980’s and early 1990’s. Their entire catalogue has now been released as a two CD + 1 DVD Box Set titled The Traveling Wilburys Collection.

From pieces of pop heaven such as “Handle With Care,” “End Of The Line,” and “She’s My Baby” to the quirky “Wilbury Twist” and “Tweeter And The Monkey Man;” it is a journey through the best pop music has to offer. Their first album with Orbison’s soaring voice finds them at their best but everything is above the norm.

Jeff Lynne is a master producer and their sound was always clear and crisp and remains so on this release. The accompanying booklet is extensive. The DVD presents a history of the band and takes one back a quarter of a century to where everyone looks a lot younger and in the case of Orbison and Harrison are still alive.

The Traveling Wilburys were a short term project by five superstars. In some ways I can’t help but think the other four wanted to play with Orbison as the band only carried on for one more album following his death. They left behind a stunning collection of well-crafted music that represented a unique and creative career stop for the musicians involved. High recommended for any fan of American rock and roll.

Roy Orbison and one of his songwriting partners, Bill Dees, were sitting at the kitchen table as Orbison’s wife was leaving the house to go shopping. Orbison asked her if she needed any money and Dees responded with the line, “A pretty woman never needs any money.” By the time his wife returned home, the biggest hit of his career had been written.

“Oh Pretty Woman” reached the tops of the BILLBOARD Pop Chart, September 26, 1964, and there it remained for three weeks. It also topped the charts in Great Britain as well.

It was his 9th top ten single in a row in the United States but would prove to be the last one of his career. He switched from the Monument label to MGM and his commercial success came to a halt until a comeback 15 years later.

“Oh Pretty Woman” remains one of the definitive American rock songs of the 1960’s.

Comments Off on Oh, Pretty Woman By Roy Orbison |

Ricky Nelson and Roy Orbison had back-to-back number one hits around this time 53 years ago. It doesn’t get much better than that. Nelson’s “Travelin’ Man” would top the Billboard Hot 100 chart the weeks of May 29, and June 12, 1961. Right in the middle of those two weeks came Roy Orbison with his first number one hit, “Running Scared.”

Roy Orbison was born in Vernon, Texas and was influenced by the country swing and rockabilly movements of the day. He began his recording career during the mid-1950s with the legendary Sun Records label. “Ooby Dooby” was his only hit for the label before he signed with RCA for two single releases. He signed with the Nashville-based Monument Records label in 1960 and during the next four years produced a series of singles that ranked with the best of the era.

“Blue Angel” and “Only The Lonely” had both reached the Top 10 of the Billboard Hot 100 when “Running Scared” was released March 10, 1961. It may have taken awhile but it finally reached the number one position three months later.

Any time Roy Orbison’s music is discussed, it always comes down to his voice. He had a four-octave range that just seemed like it could go on forever. Even Elvis Presley was impressed, as he considered Orbison to possess the best voice in music.

“Running Scared” is a typical booming Orbison balled with what can be called a bolero beat. It had all the markings of an opera in under three minutes. It is also an excellent example of the power and purity of his vocal prowess.

Today, while Roy Orbison is best remembered for such classic performances as “Oh Pretty Woman,” “Dream Baby,” “In Dreams,” and “Crying;” it was “Running Scared” that brought him his first number one song.

Comments Off on Running Scared by Roy Orbison | 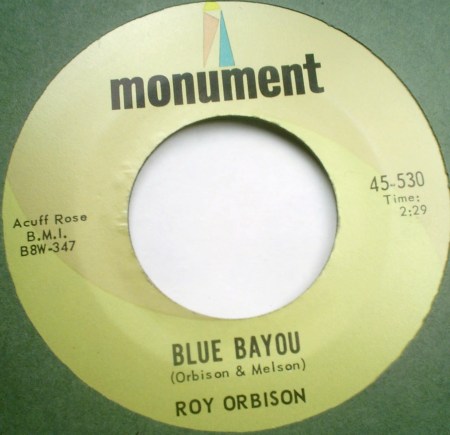 “Mean Woamn Blues/Blue Bayou” was one of the great two-sided singles in American pop history.

Roy Orbison would produce a number of rockabilly type singles and a number of soaring ballads that would become hits. “Mean Woman Blues/Blue Bayou” presented the best of both types.

“Mean Woman Blues” looked backed to his Sun Label rockabilly days and was about as hard as Orbison would ever rock. Released during August of 1963, it reached number five on the BILLBOARD MAGAZINE Pop Singles Chart.

“Blue Bayou” was the flip side and reached number 29, yet remains one of his signature songs. It was one of those smooth ballads that Orbison was so adept at producing. The vocal is effortless and travels to places very few singers can ever hope to visit.

Roy Orbison at his best.

Only The Lonely 45 by Roy Orbison 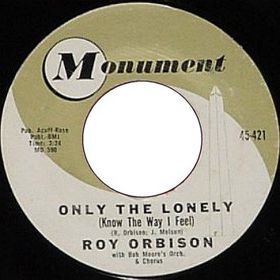 Roy Orbison was a respected rockabilly artist with the Sun label but with little commercial success. His only chart hit was “Ooby Dooby,” which reached number 59 during 1956.

During the early 1960s he signed with the Monument label for whom he would compile one of the better catalogs of music of the decade.

His break-out hit was his second single release for the label, “Only The Lonely.” It was classic Orbison as it featured his operetic voice and lyrics of heartbreak. It first reached the chart June 6, 1960, and peaked at number two on the BILLBOARD MAGAZINE Pop Singles Chart.

“Only The Lonely” was his first hit and there were a lot more to follow.

Comments Off on Only The Lonely 45 by Roy Orbison |

It’s Over 45 by Roy Orbison

“It’s Over” was one of those Roy Orbison ballads where his voice just soared and visited places that few singers have ever gone.

Released as a single during early 1964, it would spend 11 weeks on the BILLBOARD MAGAZINE Pop Singles Chart and reach number nine.

Today it is sometimes a somewhat forgotten song in the Orbison catalogue. The melody may not have been as strong as some of his classic hits but the vocal more than made up for it.

Comments Off on It’s Over 45 by Roy Orbison |

By 1962 Roy Orbison was a star having produced a number of hit singles for the Monument Label. The number two hits “Only The Lonely” and “Crying” plus the chart topper “Running Scared” had elevated him to the top rung of rock/pop singers in the United States.

February 17, 1962 found him releasing “Dream Baby (How Long Must I Dream).” It was a mid-tempo rock song with a beat that differered from his usual building ballads.

“Dream Baby” reached number four on the BILLBOARD MAGAZINE Pop Singles Chart. It remains a part of one of the better catalogues of single releases of the early to mid 1960s.

Comments Off on Dream Baby 45 by Roy Orbison |

Crying 45 by Jay and The Americans 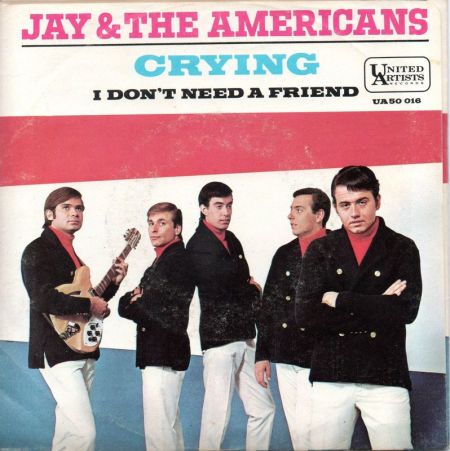 It takes a lot of confidence to cover a Roy Orbison song and especially one of his classics. Jay & The Americans released “Crying” during 1966 and it reched number 25 on the BILLBOARD MAGAZINE Pop Singles Chart.

Jay Black had a booming and strong voice but without the overall range of Orbison. Still, he produced a credible, if different, cover of this classic song. It is always interesting to compare the two versions.

Comments Off on Crying 45 by Jay and The Americans |

In Dreams/Shahdaroba 45 by Roy Orbison

Roy Orbison was at the height of his career when he released “In Dreams,” February 9, 1963. It reached number seven on the BILLBOARD MAGAZINE Pop Singles Chart.

It was a classic Roy Orbison ballad. The phrasing was some of the best of his career and the vocal went from sensitive to soaring.

The flip side, “Shahdaroba” is one of the more unique songs in the Roy Orbison catalogue. It has a far eastern flavor to it. While it did not receive any chart action, it is still worth a listen.

“In Dreams/Shahdaroba” added up to another excellent two sided-single release by Roy Orbison.

Comments Off on In Dreams/Shahdaroba 45 by Roy Orbison |

Roy Orbison’s career came to almost a halt when he left the Monument Label during 1964. His time with the MGM label produced no big hits and his albums became less commercially successful.

With a great deal of fanfare Orbison resigned with the Monument label during 1977 and released the album, REGENERATION. It was not successful and it would be another decade before he made a true comeback.

“Belinda” was a single released from the album. It proved that his voice was still a formidable instrument but it did not receive any chart action. It remains one of many obscure Roy Orbison singles.

Comments Off on Belinda 45 by Roy Orbison |