Our Day Will Come by Ruby And The Romantics 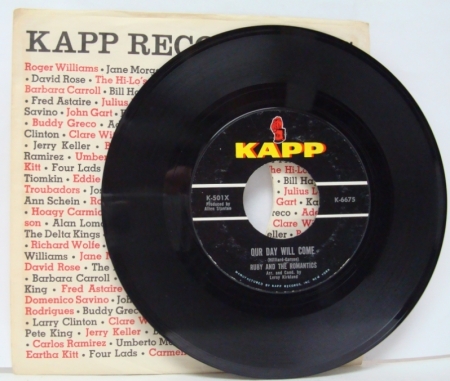 First tenor Eric Roberts, second tenor George Lee, bass Leroy Fann, and baritone Ronald Mosley were all part of the same high school choir. After graduation from high school they formed a vocal group and performed in small clubs and released a few unsuccessful singles for some small labels. They performed under the name, The Supremes, which would become one of the most famous group names of the 1960s but unfortunately not for them.

Their fortunes changed when Fann happened to hear Ruby Nash sing and invited her to join the group. She quickly became the vocal center and the group changed their name to Ruby and The Romantics, which enabled them to secure a recording contract with the Kapp label.

The group was in need of a song and songwriters Bob Hilliard and Mort Garson had one. Unfortunately they wanted Kapp artist Jack Jones to record the song. It took a lot of convincing but they finally allowed the unknown group to record their composition. It was a wise decision as “Our Day Will Come” entered the Billboard Hot 100 February 9, 1963, and fifty years ago this week reached number one, selling over one-million copies along the way. It also topped the Rhythm & Blues Chart.

Ruby had a clear voice and the Romantics were well-suited to being a backing group as their tight harmonies formed a foundation for the lead vocal. “Our Day Will Come” may have been simple but it was a smooth performance with a melody that stayed in your mind long after the music ended.

While they would never reach the top ten again, they did place seven more singles on the Hot 100, 1963-1965, before disbanding in 1971. Ruby had become disenchanted with life on the road and wanted to concentrate on raising a family. She settled in Akron and worked for AT&T.

There will be no reunions as all four male members of the group are deceased and Ruby is retired. While they may not have changed music history, they did have one shining moment 50 years ago when they topped the American music world for one week.