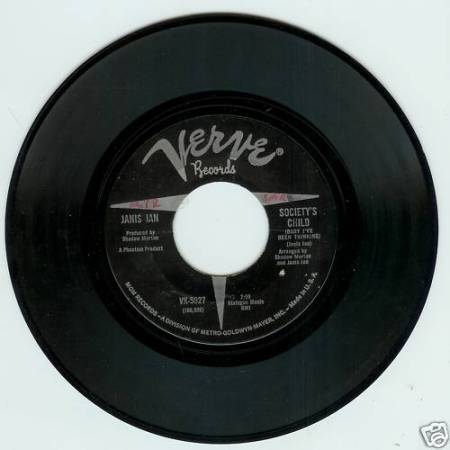 Let’s see…..It’s 1967 and you have a teenage singer/songwriter composing and issuing a song about an interracial relationship. The song is immediately banned from play on a number of radio stations. The song goes on to become a national hit and one of the most respected hits of the late sixties.

“Society’s Child” was a unique song in its day and still rings true today.

Janis Ian would go on to a productive career. Her music would sell well if not spectacularly but would be respected as some of the most thoughtful and introspective of the last four decades.

“Society’s Child” is a gentle song that belies its message. It is basically a folk tune with pop leanings. It remains a lasting and effective commentary on one of the ills of American society.

Comments Off on Society’s Child 45 by Janis Ian |