The Day I Fell In The Water by Melissa Crabtree

Melissa Crabtree is a wilderness guide who moonlights as a singer – or possibly the other way around. It really does not matter which comes first, as she has managed to integrate her passion for both into one career. Her songs travel the pathways of the natural world around her, as her time spent in the wilderness provides the observations which influence her lyrics.

She is a songwriter who is able to paint pictures with her words and then set them to simple melodies. It comes down as folk/Americana music that at times reminds me of the late Kate Wolf and Iris DeMent. She has now returned with her third album, The Day I Fell in the Water.

Crabtree has surrounded herself with a number of able musicians to support her vocals/acoustic guitar playing. The core of her supporting cast is multi-instrumentalist/producer Mark Hallman and keyboardist/backing vocalist Julie Wolf, who are joined by a rotating group of eclectic musicians who fill in the sound with fiddles, pedal steel guitars, accordions, and mandolins.

As with many folk artists, a number of songs carry messages of the singer’s philosophy of life. “Bees,” which makes use of Dayan Kai’s mandolin work to create the imagery of the lyrics, looks at the issue of wildlife conservation. “Message from a Soldier” is a gentle song of peace and is not so much confrontational as it makes you sigh.

Songs such as the title song and “Water Canyon” are love songs that are more about personal growth than culminating in a relationship. “Spirit of the Mountain” and “Daisies Talk” allow her to explore her love of the outdoors.

Crabtree’s husky voice is a perfect vehicle to present her stories. She is also able to write simple melodies and then add in various instruments that make the finished product entertaining and thought-provoking.

Melissa Crabtree continues to bring her love of nature to her music. If you want to try some folk music with a different focus, then The Day I Fell in the Water may be an album for you.

Article first published as Music Review: Melissa Crabtree – The Day I Fell in the Water on Blogcritics.

Live At Tales From The Tavern by Jack Tempchin

Jack Tempchin is primarily known as a songwriter. He greatest fame came for his songs recorded by The Eagles and Glenn Frey; but other artists such as George Jones, Emmylou Harris, Trisha Yearwood, Tanya Tucker, Kate Wolf, Tom Rush, Richie Havens, and a host of others have recorded his material.

Every once in a while he steps out of the background and issues an album of his own. On September 25, he will release his eighth album titled Jack Tempchin – Live At Tales From The Tavern. It is the latest in the Tales From The Tavern series, which records artists in intimate settings at small clubs. Ramblin’ Jack Elliott, Jon Dee Graham, Chris Hillman, and Steve Forbert have all recorded for the series and now Jack Tempchin joins their ranks.

His new release is a CD/DVD combo which presents him at his simple best as he sings a number of his well known songs and combines them with some newer material. It is just his voice, guitar, and harmonica, which puts a new spin on many of the tracks as it keeps the focus on the lyrics and his skill as a songwriter.

Two of his most famous Eagles compositions highlight the album. “Peaceful Easy Feeling” was made for his laid back approach but “Already Gone” is transformed from rock to a folk interpretation. Two songs associated with Glenn Frey, “The One You Love,” and “You Belong to the City,” receives similar treatment.

I had forgotten he wrote the Johnny Rivers hit, “Slow Dancing.” Here he presents a gentle version of Rivers’ mid-tempo pop rocker. When you add in such lesser known tunes such as “Bender,” “Loneliest Piano in Town,” “Jazzbird,” and “Jesus and Mohammed,” you have a fine collection of well-crafted songs.

Tempchin’s approach is about as laid back as they come, but he is perfect for a small club setting. His patter and stories between the songs only add to the atmosphere. Live At Tales From The Tavern is a heartfelt live presentation by Jack Tempchin of some of his notable material. It is a fine way to spend an hour. 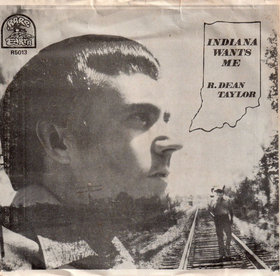 R. Dean Taylor was a Canadian singer/songwriter who was hired by the Motown label as a producer/songwriter/singer. He would co-write such singles as “Love Child” by The Supremes, “All I Need” by The Temptations, “I’ll Turn To Stone” by The Four Tops,” and “Im Livin’ In Shame” by Diana Ross and The Supremes.

Today he is best remembered for his own single, “Indiana Wants Me,” which was issued on the Motown subsidiary label, Rare Earth. It was released during the late summer of 1970 and peaked at number five on the BILLBOARD MAGAZINE Pop Singles Chart in the United States.

It was a song about a murderer wanted by the Indiana police. It came complete with the sound of sirens. It actually was a better listen than it sounds. He would place three more songs on the singles chart but never crack the top 50 again.

Comments Off on Indiana Wants Me 45 by R. Dean Taylor |