Songs From The Road By The Spin Doctors 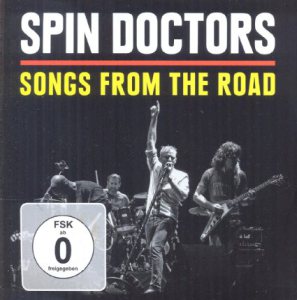 The Spin Doctors were formed during the late 1980’s and grabbed the brass ring with  their first release as Pocket Full Of Kryptonite sold in excess of five million copies in the United States. While they have not had any other releases reach that level, they have remained in the forefront of the music scene for the last two decades.

They have now returned as a part of Ruf Records Songs From The Road series. Their 14 song set was recorded live at the Harmonie Club in Bonn, Germany, on October 17, 2013. Released as a CD/DVD set,  it presents the modern day version of the band and their songs.

The set catches the band in a smaller venue. They come across as a gritty, hardworking band who are very in touch with their audience.

The material covers their career from their early big hits “Two Princes” and “Little Miss Can’t Be Wrong” to material from 2013’s If The River Was Whiskey.

The Spin Doctors may not receive the press of 20 years ago but The Road proves that they remain relevant nearly thirty years after their formation.

Music Reviews: Everything Else | Tagged: Spin Doctors Songs From The Road |