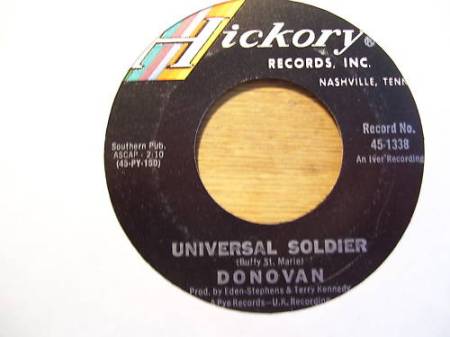 Before Donovan became a full fledged star during the mid to late 1960’s, he released a series of gentle folk singles for the Hickory label. “Catch The Wind,” “Colours,” and “Universal Soldier” all received some chart action in The United States.

The third of the three singles, “Universal Soldier,” was written by folk icon Buffy Sainte Marie and was released September 25, 1965. It would reach number 53 on the BILLBOARD MAGAZINE Pop Singles Chart.

While I have never like the abrupt ending, the song is a biting anti-war song that has been covered by numerous artists down through the years. Donovan was wise to present it in a stripped down version.

While not as well know as many of his hits, it remains one of his finer performances.

Comments Off on Universal Soldier 45 by Donovan |