Walk Don’t Run ’64 by The Ventures 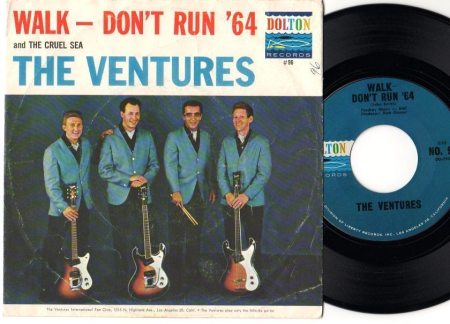 If at first you succeed, try try again. That saying for the Ventures worked out very well.

The Ventures are now members of The Rock And Roll Hall Of Fame and the most successful single of their career was their first chart hit. “Walk Don’t Run” reached number two on the BILLBOARD MAGAZINE Pop Singles Chart during the summer of 1960.

By 1964, they had not had a chart single in over a year and so decided to update their biggest hit and appropriately titled it, “Walk Don’t Run ’64.” The music was better than the idea and it reached number eight on the BILLBOARD Singles Chart during the summer of 1964, proving that a good song is always a good song.

Comments Off on Walk Don’t Run ’64 by The Ventures |

Theme From A Summer Place 45 by The Ventures 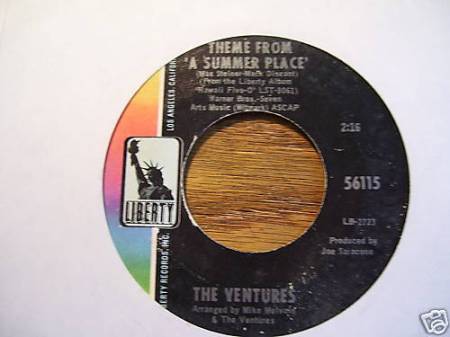 “Theme From A Summer Place” will always be associated with Percy Faith. His version spent nine weeks at number one during 1960.

The Ventures released their single during 1969. Their’s was guitar based rather than having the lush strings. Unfortunately it would stall at number 83 on the BILLBOARD MAGAZINE Pop Singles Chart and was the band’s last chart single.

All ended well for The Ventures as they are now safely enshrined in the ROCK AND ROLL HALL OF FAME.

Perfidia 45 by The Ventures 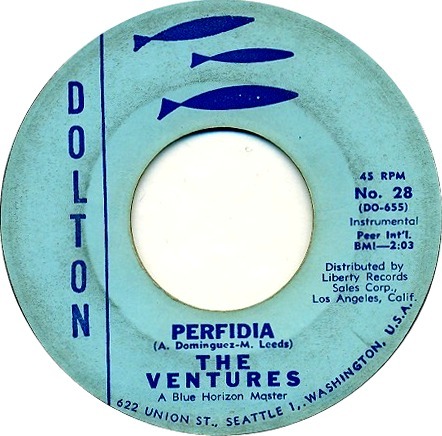 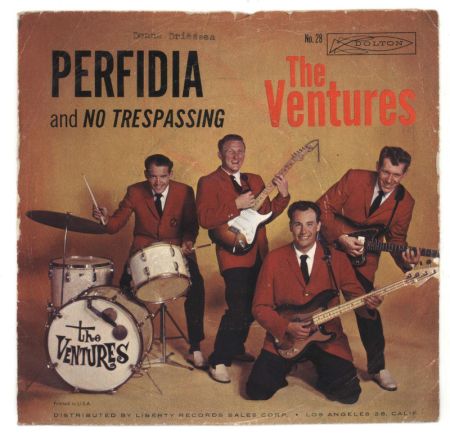 The Ventures are now safely enshrined in The Rock And Roll Hall Of Fame. They sold millions of albums during the course of their career and placed 14 singles on the BILBOARD MAGAZINE Pop Singles Chart.

They are best remembered for their early single hits, “Walk Don’t Run” and “Ram-Bunk-Shush” which were released during 1960 and 1961.

Right in the middle of these two hits was their second single release. “Perfidia” was an old Xavier Cugat hit from 1941. The Ventures version would reach number 15.

“Perfidia” would help to establish The Ventures as one of the leading instrumental groups in the world.

Comments Off on Perfidia 45 by The Ventures |

Hawaii Five-O 45 by The Ventures 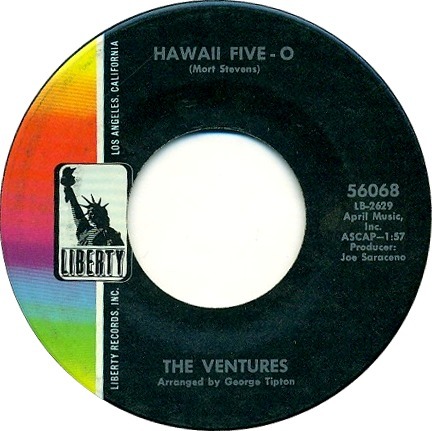 The Ventures placed 14 singles on the BILLBOARD MAGAZINE Pop Singles Chart on their way to The Rock And Roll Hall Of Fame. “Hawaii Five-O” was their13th and second biggest.

Before the days of cable, people had to be content to watch the basic networks. There were alot less options and millions of people turned in to watch HAWAII FIVE-O each week. The first thing they heard was the theme song.

It was a different song than The Ventures usually produced. It had heavy drums and brass leading off the song. It was catchy, memorable, and was an instant radio favorite.

Comments Off on Hawaii Five-O 45 by The Ventures | 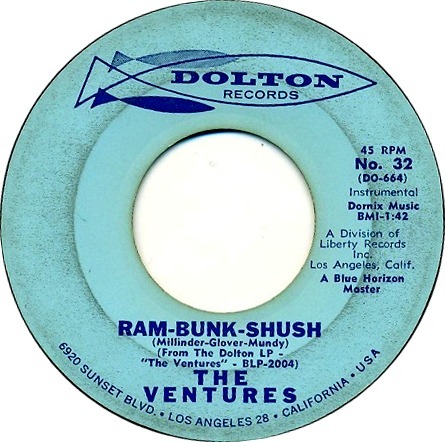 The Ventures now reside in The Rock And Roll Hall Of Fame. They were formed in Pacific Northwest during the late 1950’s. Bassist Nokie Edwards, lead guitarist Bob Bogle, rhythm guitarist Don Wilson, and drummer Howie Johnson would release dozens and dozens of albums during the course of their career.

“Ram-Bunk-Shush” was isseued January 23, 1961 and became their third chart single reaching number 29 on the American singles charts. It may have been an odd name but the music was melodic, creative, and stayed with you. It was perfect radio fare during the sixties surf era.

The Ventures would sell tens of millions of albums during the 1960’s and place 14 singles on the American charts.

Wilson and Edwards are the two surviving members and still tour with added musicians under The Ventures name.

Comments Off on Ram-Bunk-Shush 45 by The Ventures |

Walk Don’t Run 45 by The Ventures

The Ventures are now members of The Rock and Roll Hall Of Fame and I’m trying to think of another instrumental goup that has been so honored.

They were originally from the northwest and were made up of lead guitarist Bob Bogle, rhythm guitarist Don Wilson, bassist Nokie Edwards and drummer Howie Johnson.

“Walk Don’t Run” was their first chart hit and also their biggest reaching number two in July of 1960. It was a unique and clever cover of the Johnny Smith penned tune. “Walk Don’t Run 64” would also be a top ten hit four years later proving that a good song is always a good song.

The Ventures always treaded the line between rock and pop successfully and this release was no exception. They had the ability to interpret songs in unique ways 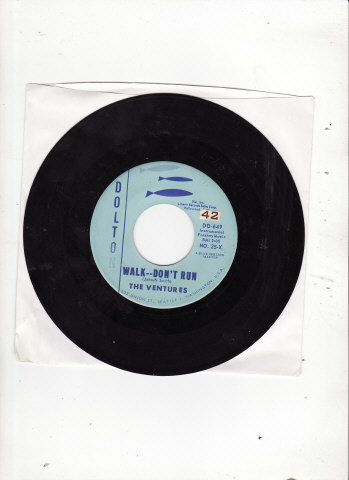 and were one of very few instrumental groups to have a long and successful career. They have released dozens of albums and are still a functioning group today.

“Walk Don’t Run” is approaching the fifty year mark and remains one of the better instrumental songs in rock ‘n’ roll history.

Comments Off on Walk Don’t Run 45 by The Ventures |