Pop Art Live By The Rasberries

The Raspberries were formed in 1970 and for five years and four albums produced an early form of power pop based on perfect harmonies and melodies. In some ways there sound was almost to perfect for the era as they never received the  complete respect of the rock audience of the day.

On November 26, 2004, the lights were turned back on the the Raspberries. The four original members, guitarist/vocalist Eric Carmen, lead guitarist Wally Bryson, bassist David Smalley, and drummer Jim Bonfanti reunited for the opening of the the Cleveland branch of the House Of Blues. That performance has now been released as a two disc set titled Pop Art Live.

For a band that had not performed together in three decades, the Raspberries are in fine form. Hit songs such as “Go All The Way,” “Let’s Pretend,” and “I Wanna Be With You,” are still examples of pure melodic pop.

In addition to their well-known material, they did a little deeper into their catalog plus present covers of songs by the Beatles and the Who. The Beatles “Baby’s In Black,” “Ticket To Ride,” and “No Reply” are transformed into American pop songs. Likewise the Who’s “I Can’t Explain” is filled out with tight harmonies.

My only criticism, there appears to have been a bit of overdubbing after the fact, which takes away from the purity of the live performances.

The Raspberries are one of those artists that are more appreciated after the fact. Pop Art Live is a nice modern day presentation of what you have missed for the last 40 years or so.

Listening to such tracks as “Respirator Blues,” “Texas Cadillac,” and “Ain’t That Dandy” makes you quickly realize how good a blues guitarist Mike Welch is. But two great guitarists are better than one, so when Duke Robillard and Jimmie Vaughan come together on “Going To The Country,” “I Have News For You,” and “Blood Stains On The Wall” you have a true blues guitarists delight.

In many ways you have a collection of excellent blues musicians just having a good time together creating good music.

In addition to some mighty fine blues there is an added incentive for purchasing the album; all proceeds are donated to the Knickerbocker Music Center, a non-profit school located in Westerly, Rhode Island, which provides instructional training in blues and jazz. 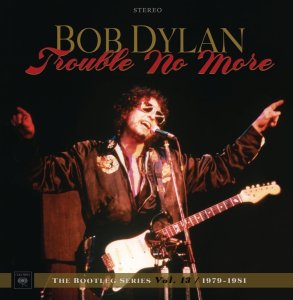 Bob Dylan’s Volume 13 of his Bootleg Series has been released in a number of formats including a four LP set.

Trouble No More: The Bootleg Series Volume 13/1979-1981 covers one of the more controversial periods of Bob Dylan’s career. Slow Train Coming (1979), Saved (1980), and Shot Of Love (1981) found Dylan exploring his developing religious beliefs. The re-action to these gospel flavored releases was mixed but they have settled into an accepted stop in his career journey.

His new four LP set has gathered 30 unreleased live tracks from his 1979-1981 tours. They include three previously unreleased songs. Tracks such as “Slow Train,” “Gotta Serve Somebody,” “Precious Angel.” “Solid Rock.” and “Saved” have more power and conviction when performed live, which make the studio versions pale in comparison.

The three songs making their debut, “Ain’t Gonna Go To Hell For Anybody,” “Ain’t No Man Righteous, No Not One,” and “Blessed Is The Name” explore the fundamentalist side of his theology. These songs are quite a departure from his protest songs of the 1960’s.

The sound is crystal clear, especially for liver performances that have been in the vaults for almost four decades. The tracks are not presented in any chronological order but given the cohesive nature of the material, this is not a big issue. One can’t help but wonder what other material was presented in the concerts other than the religious material.

Bob Dylan seems to have an endless supply of material in the vaults and if the quality of the live material is similar to this release; there are some good times ahead for his fan base.

Trouble No More: The Bootleg Series 1979/1981 is one of the better releases in Dylan’s Bootleg Series. It bring to life a very specific phase of his career that is often overlooked. The vinyl component is a nostalgic bonus.

While they released nine studio albums during their existence, it is their first album, Wild Wild Love, that remains their best and most elemental. It is one of the ultimate self-produced garage albums as it was actually recorded in a garage on a direct two-track to tape system. Originally released in 1990, it now returns in an expanded version.

The original album is a live blast of twisted rockabilly built on Romweber’s pulsing guitar runs and Smith’s thumping drums.  The jazzy “Man With The Golden Arm” is transformed into a driving rock classic. “Strut My Stuff” is a guitar lover’s delight.

The band got even more basic with the release of the cassette-only In Stereo. Only 2000 copies were printed but now the six songs have been added to the expanded release. The Leiber/Stoller rock staple “Riot In Cell Block #9” and Buddy Holly’s “Think It Over” are twisted all out of shape and then re-assembled. Even Elvis’ gentle “Love Me” is turned into a vehicle for Ronweber’s guitar fantasies.

The second disc contains 13 outtakes. Songs such as “”Stephane Grapppelli’s “Minor Swing,” Huey Lewis’s “You Made Me Cry,” and staples ranging from “Harlem Nocturne” to “Bumble Bee Boogie” make for a varied above average group of extras.

The Flat Duo Jets created rock and roll at ground level. They were similar to thousands of high school bands, but just more talented. Their music is raw, gritty, and ultimately what rock and roll should be about.