The Promise by Mitch Ryder

Mitch Ryder, born in 1945, has been rocking for almost 50 years. Born William Levise, Jr. in Detroit, Michigan, he began performing while still a teenager. His early band, The Rivieras, caught the attention of legendary producer Bob Crewe who moved the group to New York City. A name change was necessary because there was a band of the same name and a national hit with “California Sun,” so Mitch Ryder and The Detroit Wheels were born.

From 1965-1967, Mitch Ryder and The Detroit Wheels produced some of the better rock singles of the decade. Songs such as “Jenny Take A Ride,” “Little Latin Lupe Lu,” “Devil With The Blue Dress/Good Golly Miss Molly,” “Sock It To Me Baby,” and “Too Many Fish In The Sea” were high-octane, up-tempo rock ‘n’ roll classics, propelled by Ryder’s powerful voice. His career took a downturn during the late ’60s when he released a number of pop songs, but he made a comeback with a trio of excellent, if under-appreciated, hard rock albums, How I Spent My Vacation (1979), Naked But Not Dead (1980) and Never Kick A Sleeping Dog (1983).

He has built a loyal following in Europe where he has issued a number of albums down through the years. Next month will find him releasing his 2009 European LP, Detroit Ain’t Dead Yet (The Promise), in the States. Now titled simply The Promise, it is Ryder’s first exclusively U.S. release of new material in 30 years.

The album was produced by Don Was and its core musicians include keyboardist Jamie Mahuberac, bassist Reggie McBride, guitarist Randy Jacobs, and drummer James Gadsen.

The music travels a more eclectic path than one would expect from this veteran rocker. Soul, slower-tempo material, and confessional songs share space with his usual brand of rock ‘n’ roll. He gives a soulful performance on the title track. “Junkie Love” is a stark and raw look at his drug addiction days. “My Heart Belongs To You” glides into a funky and smooth groove. He even goes in a Latin direction with “Let’s Keep Dancing,” which has a tango beat.

When Ryder decides to rock, he remains one of the best in the business. “The Way We Were” may contain lyrics about society’s ills but it rocks hard throughout as does “One Hair,” “Crazy Beautiful,” and “Everybody Loses.”

The Promise is Mitch Ryder’s coming-home party. It’s a solid album that proves the 66-year-old is still an energetic, relevant artist.

Comments Off on The Promise by Mitch Ryder |

Hedgehoppers Annonymous was a British Band formed during 1963. A hedgehopper was a British Air Force term for a low flying plane. While there would be a number of personnel changes the best known line-up consisted of vocalist Mick Tinsley, lead guitarist John Stewart, rhythm guitarist Alan Laud, bassist Ray Honeybull, and drummer Leslie Dash.

They only released a few singles during their career and only one made the BILLBOARD MAGAZINE Pop Singles Chart in the United States making them one hit wonders.

“It’s Good News Week” was released December 4, 1965 and reached number 46. It was a big hit in England reaching number five.

An excellent song by an obscure British Invasion group.

Perry Como was at the height of his career during the late 1940s and early 1950s. Just about every release was successful.

“Chi-Baba, Chi-Baba (My Bambino Go To Sleep)” was released during 1947 and it reached the number one position on BILLBOARD MAGAZINE’S Singles Chart, June 28, where it remained for three weeks.

It was a gentle lullaby that resonated with the record buying public of the day as it sold over one million copies. It was another in the long line of number one hits for Perry Como.

Walking On Sunshine 45 by Katrina And The Waves

Much of their work fell into the new wave or alternative rock vein. One of the exceptions was was the joyous rocker, “Walking On Sunshine.” Released as a single March 23, 1985, it reached number nine on the BILLBOARD MAGAZINE Pop Singles Chart.

It was a joyous and up-tempo rocker with a brass foundation. It was one of the most infectious singles of the mid-1980s and remains the crowning achievement of their career. 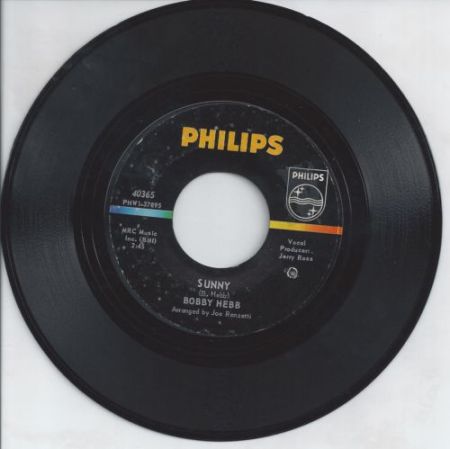 His biggest hit was “Sunny.” Released June 26, 1966, it spent two weeks in the number two position. His hit came ar the right time as he was a part of the 1966 Beatles tour.

Hebb passed away away during 2010 at the age of 72 leaving behind this one memorable song.

Comments Off on Sunny 45 by Bobby Hebb |

Peg O My Heart 78 by The Harmonicats

Not many harmonica group topped the singles charts but so it was for The Harmonicats.

The group formed during 1944 and consisted of Jerry Murad, Bob Hadamik, Pete Pederson, and Al Fiore. THey reached into the past for their most famous recording. “Peg O My Heart” was a 1913 hit for Charles Harrison when it was the number one song in the country for 14 weeks.

THeir version of the song topped the BILLBOARD MAGAZINE Singles Chart, June 21, 1947. It then fell from that position for three weeks but returned once again and spent three more weeks at the top of the charts for a total of four weeks.

It remained an easy listening favorite for years.

Comments Off on Peg O My Heart 78 by The Harmonicats |

(Here They Come) From All Over The World

Jan & Dean were selected as hosts for the T.A.M.I. Show. The concert, held October 28 and 29, 1964, featured some of the biggest music acts in the world including James Brown, The Supremes, The Beach Boys, and The Rolling Stones. It was released as a film shortly afterwards.

“From All Over The World” was the concert’s theme song and played over the film’s opening credits. Released as a single March 13, 1965, it reached number 56 on the BILLBOARD MAGAZINE Pop Singles Chart.

It was a song that worked better in the movie as it introduced the acts. It remains one of their least known singles.

Comments Off on (Here They Come) From All Over The World |

Saturday’s Father 45 by The Four Seasons

The Four Seasons career was on a downward spiral as the 1060s came to a close. The music landscape was changing and their brand of pure pop was not being recived as well as in the past. It would not be until the mid-1970s that they would make a comeback.

The Four Seasons began to tinker with their sound and “Saturday’s Father” was symbolic of their new style. The harmonies were still present but the songs and melodies were not as smooth.

The public re-action to their new style was poor as “Saturday’s Father” became one of their very few singles not to chart.

Comments Off on Saturday’s Father 45 by The Four Seasons |

And now from the fertile mind of Joel Gilbert, the man who gave us Paul McCartney Really Is Dead: The Last Testament Of George Harrison, we now have his latest release, Elvis Found Alive. So in the world of Joel Gilbert,Paul McCartney is dead and Elvis Presley is alive, and may I say, “Oh lord and away we go.”

Elvis Is Alive, which will be released January 24, is being advertised as a documentary. A documentary film can be historical, express an opinion, carry a message, and be dramatic but at its foundation it is based on fact. Fiction, on the other hand, is imaginary and not factual. Let’s see where Mr. Gilbert’s latest release falls.

Joel Gilbert visited Graceland and became suspicious as to the validity of Elvis’ death. He made a Freedom of Information Act request for U.S. government files about Elvis Presley. Lo and behold documents arrived from the FBI revealing an address for Federal Agent Jon Burrows, which turns out to be Elvis’ alias. After a brief confrontation, Elvis agreed to an exclusive interview.

Elvis talks about how the social unrest of the late 1960s and terrorism by the Weather Underground drove him to ask President Nixon to make him a Federal Agent. His battles against the Weather Underground finally lead him to fake his death in order to go undercover. He now wants to return to his singing career, but the Obama administration is preventing it.

The production values are right out of the Ed Wood School of Cinematography but without the amusement factor. One thing that Gilbert is very good at doing is taking modern myths and legends and combining facts and fiction to create his stories. I guess a fictionalized documentary would be the best definition of his approach. Some people may find it interesting or at least amusing but at 128 minutes, either of those is a stretch.

First there was Paul McCartney and now Elvis. Can Marilyn Monroe be far behind? There may be some appeal for hardcore fans of the king or people who keep the hope alive that he really is still with us. So, if you really gotta, grab a 12 pack and have at it.

Comments Off on Elvis Found Alive (DVD) by Joel Gilbert | 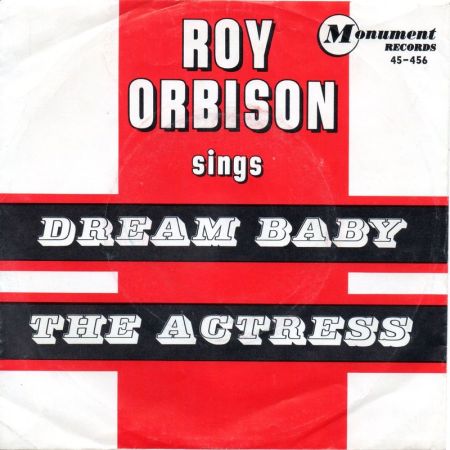 By 1962 Roy Orbison was a star having produced a number of hit singles for the Monument Label. The number two hits “Only The Lonely” and “Crying” plus the chart topper “Running Scared” had elevated him to the top rung of rock/pop singers in the United States.

February 17, 1962 found him releasing “Dream Baby (How Long Must I Dream).” It was a mid-tempo rock song with a beat that differered from his usual building ballads.

“Dream Baby” reached number four on the BILLBOARD MAGAZINE Pop Singles Chart. It remains a part of one of the better catalogues of single releases of the early to mid 1960s.

Comments Off on Dream Baby 45 by Roy Orbison |