Daydream 45 by The Lovin’ Spoonful

“Daydream” was another smooth outing from the Lovin’ Spoonful. There were able to fuse rock, pop, and folk music into a unique and tasty mix. Their career may have been short but it led to their induction into The Rock And Roll Hall Of Fame.

“Daydream” first reached the BILLBOARD MAGAZINE Pop Singles Chart, Feb. 26, 1966 and almost reached the top of the mountain as it would spend two weeks in the number two position.

The muisic of the Lovin’ Spoonful was called “good time music” and when you listen to their best, you can’t argue.

Comments Off on Daydream 45 by The Lovin’ Spoonful |

The Lovin’ Spoonful produced a slick fusion of pop and rock, (except for their big number one hit, “Summer In The City”), and rode it all the way to the Rock And Roll Hall Of Fame.

“You Didn’t Have To Be So Nice” was released November 27, 1965 and reached number 10 on the BILLBOARD MAGAZINE Pop Singles Chart. It had a catchy guitar intro. and a smooth vocal by John Sebastian. It was perfect AM radio fare back in the mid-1960s.

The Lovin’ Spoonful were primarily a singles band and when you gather all those releases together, it makes for one of the better and lighter listening experiences of the 1960s.

Do You Believe In Magic 45 by The Lovin’ Spoonful 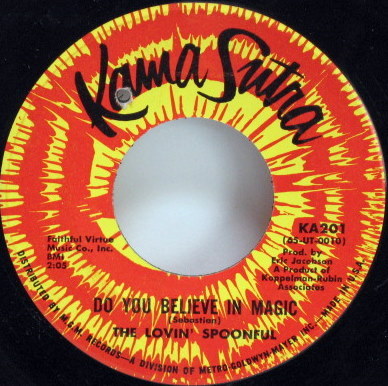 “Do You Believe In Magic” was the first single release by The Lovin’ Spoonful and their first step toward The Rock And Roll Hall Of Fame. It and they would be an immediate success, reaching number 9 on the BILLBOARD MAGAZINE Pop Singles Chart.

They labeled their sound “Good Time Music” and that was an apt definition. It was bright, cheery, and stayed with you. They would place 14 songs on the American Singles Charts during the 1960’s.

“Do You Believe In Magic” still makes a person feel good nearly 46 years after its original release,

Anthology by The Lovin’ Spoonful

How an obscure and commercially unsuccessful old folk band like The Mugwumps could produce half the members of two Rock And Roll Hall Of Fame groups is beyond me. Cass Elliott and Denny Doherty went on to The Mamas and The Papas and singer/harpist/autoharp player John Sebastian plus lead guitarist Zal Yanovsky formed The Lovin’ Spoonful with drummer Joe Butler and bassist Steve Boone.

The Lovin’ Spoonful were inducted into The Rock And Hall Of Fame on the strength of a series of impeccably produced and extremely catchy single releases which were issued during the last half of the 1970’s. Songs such as “Summer In The City,” “You Didn’t Have To Be So Nice,” Did You Ever Have To Make Up Your Mind,” “Do You Believe In Magic,” “Rain On The Roof,” “Daydream,” and “Nashville Cats” all reached the American top ten and sold millions of copies. Their sound was labeled good-time music and while it may not have been essential to the development of rock ‘n’ roll, it was pleasant and extremely popular.

Their catalogue has been reissued many times down through the years and in many different formats. One of the best is Anthology which was issued by the Rhino label during 1990. While it is not by any means a complete presentation of their music, its 26 tracks do cover the highlights and for a singles band that is enough.

Their big hits are still recognizable four plus decades later. They are sixties folk/pop at its best. The only single release to depart from this formula was the brilliant “Summer In The City” which topped the American charts during 1966. It was a gritty rock song, complete with sound effects, which made you feel apart of the inner city. Rolling Stone Magazine ranked it as one of the 500 greatest songs of all time.

This CD does delve a little deeper into their catalogue. “Jug Band Music” was a whimsical look at their musical roots. The gentle “Younger Girl” was a hit for The Critters. “Pow” was used by Woody Allan in his movie What’s Up Tiger Lily. “Night Owl Blues” and “Butchie’s Tune” show they could have a harder edge every once in awhile.

The Lovin’ Spoonful may not come to mind very often but Anthology is a pleasant way to spend an hour or so. It is a trip back to the sunny side of the late sixties. Given what else was going on at the time, it is not a bad place to be.

Article first published as on Blogcritics.org

Comments Off on Anthology by The Lovin’ Spoonful |

Summer In The City 45 by The Lovin’ Spoonful

John Sebastian, Zal Yanovsky, Mama Cass and Denny Doherty were all members of the Mugwumps. From that failed folk group would come half of two of the pure pop groups of the sixties. The Lovin’ Spoonful and The Mamas and The Papas would go on to be inducted into the Rock and Roll Hall of Fame.

The Lovin’ Spoonful’s first four singles releases were all hits and would be a fusion of folk and pop. “Do You Believe In Magic,” “You Didn’t Have To Be So Nice,” “Daydream” and “Did You Ever Have To Make Up Your Mind” all made the American top ten and were light and catchy.

Their fifth release was very different. “Summer In The City” was up-tempo rock ‘n’ roll that retained the pop sheen of their earlier releases. It came complete with sound effects and shuffle guitar. It would be their most successful release topping the American charts for three weeks in the summer of 1966.

The Lovin’ Spoonful would only last as a group for about five years but during that time they would create an enjoyable catalogue of releases. “Summer In The City”

remains the highlight of their output.